When silent animals cry out in pain… 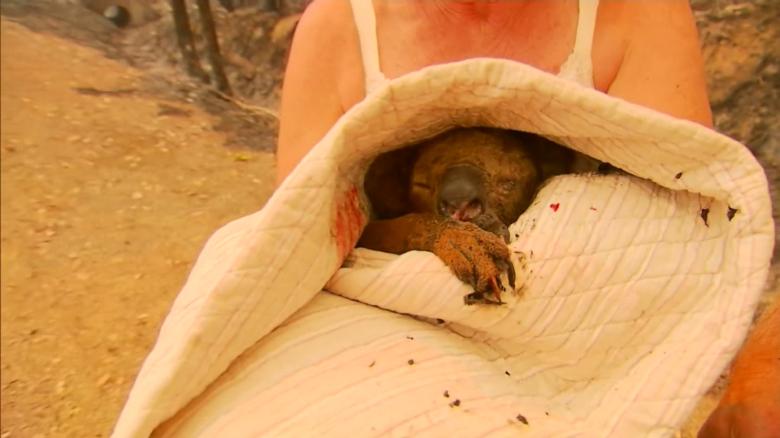 End Animal Slaughter contributor LYNLEY TULLOCH wrote this piece before hearing the sad news today that Lewis the Koala had died from his injuries in the Australian bush fires.   Her follow-up piece will be available on our website in the next 24 hours.

The upsetting image of Lewis and other koalas burning are an example of extreme weather events brought about through climate change.  Earth and its biodiversity are hurting.   How long can we keep turning the other way? It is urgent we adopt a new ethic to care for our planet before it’s too late.

The devastating bush fires in New South Wales and Queensland Australia are a catastrophe that has far reaching consequences – for people and animals. Bush fires are a regular seasonal occurrence in Australia. But what is unique about these latest bush fires is that they are occurring very early in the season on an unprecedented scale.

The bush fires have so far ravaged 2.5 million acres of land, killing at least four people and destroying over 300 homes.

The screams of animals dying in pain are echoing from the bush. It has been reported that koalas are being killed in the hundreds and colonies are being wiped out. One major colony in the Lake Innes Nature reserve has been razed by the fire – and it was once home to over 600 koalas.

Koalas are one of life’s many marvels. They are not bears, but rather marsupials, and have pouched young. They have evolved alongside the Australian Eucalypts for millions of years. They rely on these trees for their survival, having a multi-lobed highly efficient liver and gut system to eliminate the toxins in the Eucalypt leaves.

Koalas and the Australian Eucolypts have evolved together.

I saw the recent video of a koala limping out of the raging fires before being rescued by a passing motorist, who must be commended for her bravery. The koala, a silent animal except for in mating season, cried out in pain as his merciful angel poured cool water on him. While this koala, ‘Lewis’,  was saved, hundreds of others have perished.

Imagine not being able to be evacuated from your one and only home, a source of both shelter and food. Imagine burning to death.

Like many people I have thought about the link between climate change and the bush fires. The science suggests that while climate change may not be the cause of the fires, it is almost definitely contributing to them because of the hotter, drier climate. Scientists have long predicted that that Australian bush fires would become more intense and frequent due to climate change. 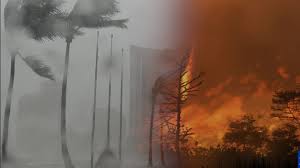 We are now living through those predictions and, in my view, it should be a wake up call for those people who still deny anthropogenic climate change.

That climate change is hurting animals is evident. It hurts wild animals like koalas. It also kills domesticated animals that cannot escape extreme weather events. For example in the Queensland floods in February this year 600.000 cattle were killed. Flood waters rose up to form a wall of water 70km wide. 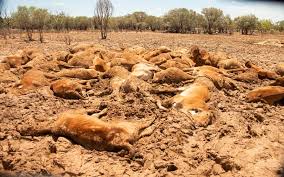 These floods also devastated native species such as marsupial mice and birds. Floods cause disruptions in gene flow in native species, as their range gets limited. Basically the cycle of regeneration of biodiversity is being messed with due to the effects of extreme weather events – the hall mark of climate change.

The loss of diversity of life and consequent extinction crisis we are currently experiencing has passed a tipping point. Koalas may now end up on the endangered list due to the bush fires. They have been in Australia for 30 million years according to fossil records. Humans have been on Earth for 300-200,000 years only. And, according to ninety seven percent of climate scientists, it has only been since the mid twentieth century that human activity has caused climate warming trends. We came, we saw, we conquered.

Basically, in just under two hundred years humans are causing mass destruction and suffering. It is no wonder that David Attenborough calls humans a plague on Earth.

Yet Attenborough is wrong in one sense. We shouldn’t label all humans with the same brush. Aboriginal Australians have been in Australia for at least 60.000 years. The koalas were fine under their stewardship. Yet it has only been the arrival of Europeans and their quest for economic dominance through global capitalism and industrialized development that has caused our current predicament. 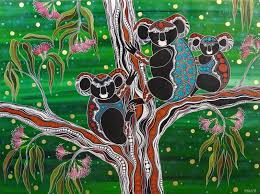 Painting by Melanie Hava, Koalas in the Gumtree (aboriginal-art-australia.com)

I’m not trying to single out Europeans – but it is true that many indigenous peoples have lived in sustainable ways with the Earth before European colonization.

Watching that koala limp out of his home, his body singed and burning reminded me of some kind of hell on Earth. This kind of hurt you cannot put a band aid on and you cannot stop it – at least not while we feed the engine of capitalist market economic growth which is at the root of it all.

Capitalism, and ‘economic development, have been trotted out as an unqualified good, yet it’s really a monster devouring whole ecosystems and killing life.   And while capitalism still keeps churning away, run away climate change is fast on its heels. It will overtake capitalism soon, bringing it to the ground, causing untold suffering of animals and people.

Like a sinking ship planet Earth is now struggling to support life on board. The most vulnerable, those without the means to escape, both animals and people, will suffer first. Correction – are suffering first. Media showcases the suffering. We watch through screens – seemingly distanced from the horror unfolding. 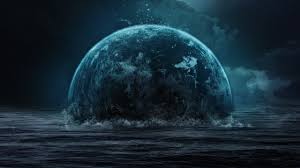 There are things you can do now to stop the screams getting louder as forests burn. Stop supporting the industries at the root of this destruction. The animal industries are a main culprit. As Greta Thunberg advises, we need to move to a plant based diet.  Become vegan.

But above all, be kind.  Be compassionate.  Plant trees and not walls – unless it’s a wall for a climber with passionfruit for the bees.  Don’t use insecticides. Nurture biodiversity on the Earth, grow your own food and give some to your neighbors.

We need to be guided by a new ethic of care for Earth, people and animals. We need to scale down, even halt, economic growth. It is the only way we will survive.

The Earth and its beautiful and wondrous life is in danger. It’s hurting. We’re all on the same ship and there is no lifeboat. 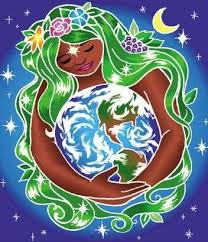