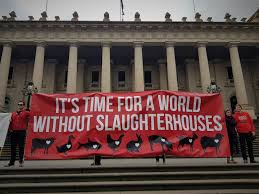 End Animal Slaughter’s Sandra Kyle does solitary slaughterhouse vigils as part of the worldwide Save movement.   In her latest blog she reflects on changes that have taken place  in the last seventy years, and predicts a world without slaughterhouses as an imminent reality.

Today standing at the entrance to Land Meats in Whanganui I found myself thinking of Mrs Gallagher. Mrs Gallagher and the Gallagher family lived a few doors down from us when I was growing up in suburban Auckland in the 1940s and 50s. Mrs Gallagher was short and compact, well-groomed and she always walked with her right forearm in front of her chest, her purse dangling from her elbow. She worked part time somewhere in the city, and every day when she got off the bus she would bustle past our house on her bandy legs to go off home to cook the evening meal of meat and three vegs we all ate in those days, and I would marvel at the aura of certainty that emanated from her. Mrs Gallagher would give you a cheery wave when she saw you, unless she didn’t like you of course, when she would ignore you, or scowl at you, or even give you a tongue lashing. Unlike my own mother, who was weighed down with care and anxiety (but who still put a brave face on it) Mrs Gallagher for me represented the widespread feeling at the time that we lived in the best of all possible worlds. ‘Things are as they are for a purpose, and if they are as they are, then they must be right as they are. God is in Heaven and all is well.’

Even as a child I knew that this was bollocks. Things were not at all right as they were. They were a real mess, just as they are now, and the reason for this, I figured out, is because the humans who create our world are full of selfishness, ignorance, greed, superstition and fear.

In a very real sense we live in better times now than in the 1950s. We are more informed and better educated, our minds are not so narrow and parochial. But Albert Einstein said it truly: ‘We can’t solve problems by using the same kind of thinking we used when we created them’ and the only way to step out of the mess we have created is for us to evolve.

Albert Einstein said it truly: ‘We can’t solve problems by using the same kind of thinking we used when we created them’ and the only way to step out of the mess we have created is for us to evolve.

To evolve our consciousness is a very tall order, and what’s the notion even doing in a facebook blog anyway? Well, because we need to get our act together as a matter of urgency – look at the state our planet is in! A lot needs to happen. but we can be pragmatic and concentrate our efforts on a couple of fundamental things. One is for individuals and organisations and governments to practice honest self-reflection, and the other is to demonstrate more compassion and empathy in our day to day lives One of the best ways we can do this is to put ourselves in the place of others, in order to feel as they do. In particular, we should try to feel for the other sentient beings we share the planet with, those very same ones we treat so appallingly badly.

Until we cry for the skinny little sparrows hopping over hot asphalt in search of crumbs; until our heart hurts to see sweaty animals locked inside a death truck on a summer’s day, we have not evolved. But we can certainly get there from here, and something we can do immediately to fast-track our evolution, is to make the decision to go vegan. 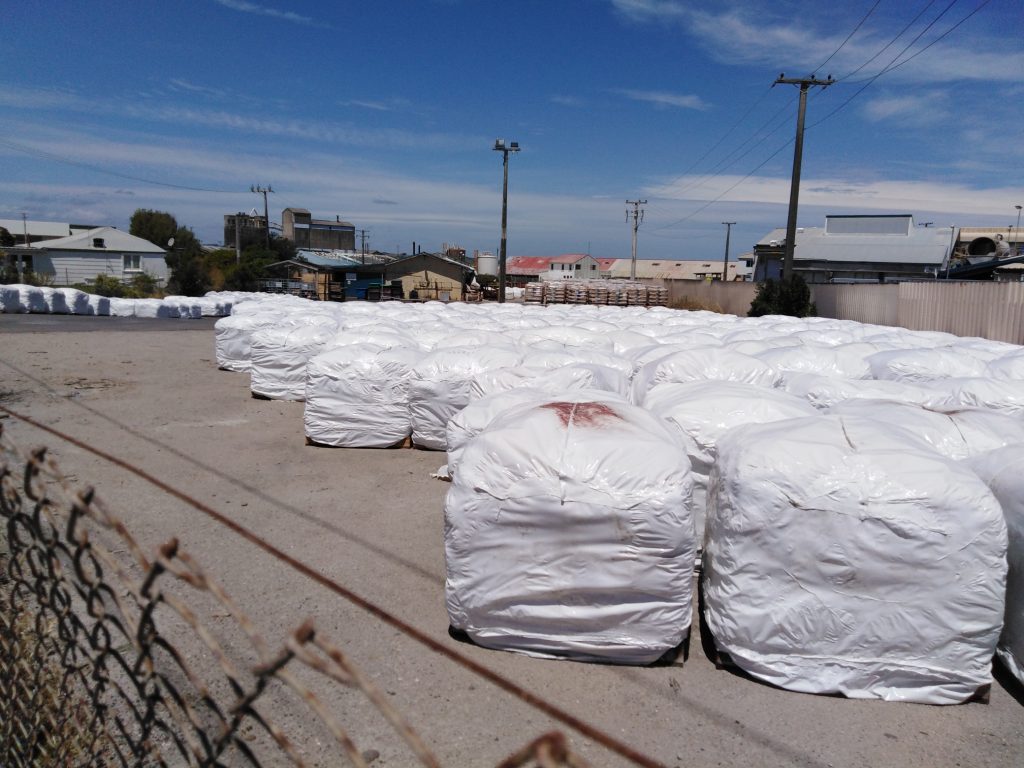 Take a look at the sea of white mounds I photographed today at the slaughterhouse. Each mound contains the skins of sentient beings who were killed recently at Land Meats. These poor animals were victims of heartless, profit-driven industries, and as animals raised for food, they were denied the same legal protection given to most other animals. Selfishness. Inconsistency. Indifference to suffering and rights. The capitalist machine reduced sentient beings to commodities; meat, bones and skin to be eaten, fed to our pets, used as fertiliser and worn on our backs and feet. The only life they will ever have was stolen from them because we as a species haven’t stopped to reflect what we are doing, and to ask ourselves ‘Is there not a better way?’

It didn’t occur to Mrs Gallagher back in the 1950s, but there IS a better way, and now we have no excuse for ignorance. We have the measure of the manner of the world we live in, and it’s up to us to clean it up.

PS A friend just messaged me to say that she had just eaten an unbelievably delicious vegan trumpet. What Tarnz didn’t know is that I had just eaten not one, but two yummy vegan cornettos! Snap!

Vegan cuisine has come into its own, so by adopting a vegan diet your taste buds are not losing out on anything at all. Vegan is the future of food, this is the plain Truth. Soon I won’t need to make my lonely stand outside slaughterhouses here in Whanganui, and my other Save Movement friends need not do their vigils either, because all slaughterhouses will be shut down.

Mrs Gallagher would never have believed it – but I certainly hope that you do.