A Plate of Scrambled – Roosters? 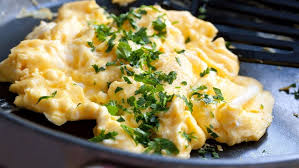 What’s behind your plate of scrambled eggs? End Animal Slaughter guest contributor SARAH OLIVER reminds us of a couple of things we may have overlooked.

It often crosses my mind that our ability to ignore the blindingly obvious makes us, and those we share the planet with, vulnerable.  A case in point is the short and painfully difficult lives of chickens.  We love to eat their flesh, as well as the fruits of their female reproductive system.  Tucking into our plate of scrambled eggs, chances are we don’t consider two major components that have been involved in producing our eggs.      One is the mysterious case of the disappearing males, the other is the ability of the modern layer hen to produce huge quantities of eggs.  No other bird in history has ever done this, for a good reason.

Before humans intervened, the ancestors of today’s hens produced around 15 eggs a year, in spring.   However, in order to satisfy our seemingly unquenchable desire to eat eggs, modern birds have been bred to lay on and on and on, at huge detriment to their small bodies, leading to them being ‘spent’ at only a fraction of their natural lifespan.

Hens can undergo horrific conditions as a result of this intensive laying.  Treated not as sentient beings but as food production units on factory farms, we can only imagine the toll on their frail bodies.  Alongside other conditions and infections, they suffer from osteoporosis.     So much calcium is used in the production of egg shells that the birds are left with brittle bones.  I once talked to an ex-chicken factory worker who said that when handled, their wings can just snap off because their bones are so weak.

The second component we miss when we are tucking into our scrambled eggs is that hens produce both male and female offspring, so what happens to all the males?    They cannot lay eggs so the Industry considers them a financial liability.   They therefore get rid of them as soon as possible after birth. For the baby roosters this means getting minced alive, (imagine throwing baby chicks into a blender) or gassed, within a few hours of hatching.  This is what we do to over 3 million baby birds each year in New Zealand.  In the UK it is 30 million, so we can only imagine the numbers of roosters macerated worldwide.

In 2001 I read an article about workers in New Zealand who were being re-organised into different roles in the egg industry.   Their new role in the production line was to feed otherwise healthy rooster chicks into the shredding machine. Their complaint was that they were ill-prepared to deal with the emotional difficulties of this role.   It is not hard to imagine how horrific such a job would be, spending your day picking out and throwing live healthy baby animals into a machine that grinds them up.  But this is what goes on, and this is what we ask of others when we purchase eggs. If we are horrified at the thought of mincing baby animals alive, then is it right to ask others to do it for us? 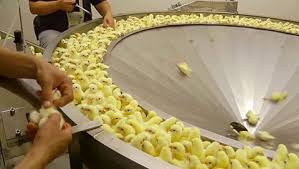 We live in an overpopulated world which makes our food choices more weighted than they have ever been. Bombarded with marketing and often conflicting nutritional advice on an unprecedented scale,  eating eggs and chicken meat seems to be winning on the promotional front.  We are turning away from red meat, but consuming a staggering amount of chickens and eggs worldwide.  According to one estimate, we kill more than 50 billion chickens every single year, an astronomical number that does not include the killing of male chicks, and hens who can no longer produce eggs.

Such is the prevalence of chickens, those we eat and those who lay our eggs, that there has been the suggestion that a mark of our modern world will be the chicken bone fossil record we will leave behind us.  Who would have thought that the humble chicken would be the defining characteristic of our age?

There is a huge amount of often contradictory information from the medical, food and dietary industries about the kind of food we should be eating, and we are also subjected to compelling advertising from the fast food industry. This can muddy the water when it comes to deciding what food is best for us.   I have a suggestion that may help our decision.   What if we put ethics and compassion first, then decide what goes on our plate from there?

I have a suggestion that may help our decision.   What if we put ethics and compassion first, then decide what goes on our plate from there?

There is a wealth of researched information on the benefits of eating a vegan, plant-based diet.  Fortunately,  over the last few years many plant-based alternatives to eating animals have emerged, and there is a wide variety to choose from.   Eating a plant-based diet is now easy, and like any other diet, it can be cheap or expensive, whole food or processed, depending on your preference and budget.  I think it is time that we rethink our relationship with the most prevalent, invisible, abused bird on the planet, the poor old Gallus gallus domesticus.  Just as we can only empathise, but not experience, another human’s pain, we cannot know precisely the level of suffering that goes on for a chicken. However, we can be sure that as sentient, complex, social animals, they do suffer, as they endure the cruel and unnatural life we have subjected them to.

Surely no plate of scrambled eggs is worth all that suffering.    Vegan scrambled eggs, on the other hand, are just as tasty, and cruelty-free. 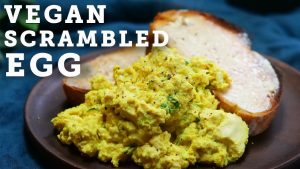