Conservation – or the Thrill of the Kill? 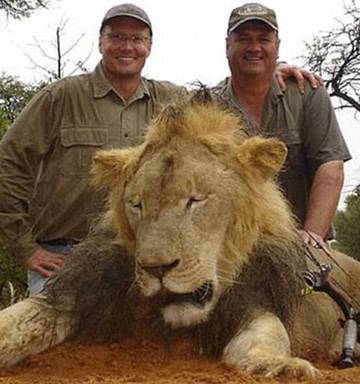 In this article End Animal Slaughter editor Sandra Kyle looks at trophy hunting and suggests that it’s time to lay down the gun and pick up the camera.

The National Geographic photo shows a middle-aged man sitting in his trophy room in Delaware, surrounded by taxidermied animals.   Above the large brick fireplace the head of a bull elephant is mounted, its trunk curled out in front, flanked by his enormous tusks.   Below him is a standing giraffe, and another giraffe rests off to the side, his or her long legs curled under their body.  When the trophy hunter shot the animals they would have fallen in a crumpled, bloody heap, but now thanks to a mould mounted under their beautifully preserved skin they have an eerily lifelike appearance.  In the photo we also see a rhino, hyenas, deer, cervals and other animals.  The hunter says hunting is in his blood, and he thinks of himself more as a conservationist and a collector rather than someone who goes out and shoots sentient beings for the thrill of the kill.

Judging by the 100 or more specimens on display, this hunter is undeniably a collector.   But what is the real reason trophy hunters pay tens of thousands of dollars to kill an animal and bring them home to put on their wall?  They may tell you it is for conservation, or to help impoverished local communities, but I suspect that is not the primary motivation.   Trophy hunting may well be about adventure, tradition, camaraderie, but it is also more than that.  Seeing the way hunters of both sexes pose grinning for photos above the corpses of the large – often dangerous – animals whose lives they have just extinguished, I suspect it is much more to do with power, status – and possibly sexual stimulation – than the desire to help human or wild animal populations.

Trophy hunters who pay tens of thousands of dollars for their licence to shoot African animals like to say that picking off certain individuals is an effective conservation tool that can benefit both animals and local communities.  It sounds good in theory, but there is a problem with it in practice.  In many of the countries where trophy hunting is carried out, there is a high level of corruption, and funds can end up lining the pockets of dishonest operators and officials rather than helping to alleviate the poverty of the local people.

When an animal is shot, it can also cause many problems within the population the animal came from.  For example, old bull elephants are favoured by some hunters because they say they are no longer adding to the gene pool and their absence will not overly affect the herd.    However, older bulls exert an important impact on the herd.   They have a wealth of experience; for example they can guide the herd to safety, or to sources of life-preserving water. They also impose order.   It has been shown that young bulls in musth, when their testosterone levels are particularly high, are  more likely to fight each other when an older bull is absent.

For trophy hunters, size evidently matters.   They go after male lions with large heads and impressive manes, and these are often the dominant male in a pride.   However, picking off one dominant male lion could lead to the pride being fractured, and also to the loss of many younger lions.   Lions are a species with a tendency to infanticide, and when a new male takes over a pride he may kill all the cubs of the deceased lion, so he can populate the pride exclusively with his own offspring.

In discussing hunting, and trophy hunting in particular, we need to consider ethics.    In 2015, Cecil the Lion was wounded by American dentist Walter J Palmer who shot him with a bow and arrow.   Cecil must have suffered greatly before he was tracked down by the dentist the next day and killed. How is it ethical to shoot a sentient animal with a bow and arrow, causing them to physically and emotionally suffer, sometimes for days, from their wound?  The phenomenon of ‘canned hunting’ is another case to be considered here.  According to Ian Michler, a South African safari operator and photographer who investigated the canned lion industry for the 2015 documentary Blood Lions, cubs are taken from their mothers and brought to petting zoos. When male lions grow into adulthood, they are lured within the sights of the ‘hunter’ for fees that are much lower than other trophy hunts,  and therefore more affordable to the non-wealthy.  The animals are pretty much sitting ducks.    And there is another deleterious spinoff from hunting lions.  Hunters have no need for the bones of the animal, so these are shipped to Asia where the wealthy can eat them crushed into a powder and consumed as a health tonic and aphrodisiac.   Thus trophy hunting is spurring on more demand for lion bones, and this is encouraging cruel and illegal poaching of lions in the wild.

A newspaper report recently revealed that some hunters are willing to pay to have leopards ‘kneecapped’ so they can shoot them more easily.

The questions must be asked:  Even if convincing evidence did exist that trophy hunting can produce conservation benefits, is it ethical to cause the death and suffering of individual animals to save a species?   Even if a killing has the potential to produce a social benefit, does that in itself mean it’s ethical?

Do humans owe anything to other species at all?  Are our own rights all that matter?

As the dominant species on the planet we have considerable potential to exploit and destroy nonhuman animals, and we have always done so.  Animals, particularly wild animals and farmed animals, are scarcely viewed as living, feeling, intelligent beings at all, but given value in relation to their economic or property value to us.   Is it not time that other animals were legally protected from our destructive activities?  At present protection for farmed animals is so weak that cruel factory farms are legal everywhere in the world, and where wildlife laws exist, they almost always correspond to species and not to individuals.

Clearly, trophy hunting brings pain, fear, suffering and death to both the individual killed and to members of their family left more vulnerable because of the killing, and possibly left them in mourning.  Many studies have shown that elephants and primates mourn, and if it is true for them, it could also be true for other species.

There is no need for us to be killing wild animals at all.  Alternative conservation approaches like photo tourism where the shooting is done with a camera and not a rifle could take the place of trophy hunting.  Substantial conservation income to benefit animal populations and local people can therefore be gained without having to take the life of a sentient being.

There is an easy solution to trophy hunting in places like Africa.   Governments around the world simply need to place a ban on trophy imports, and host countries begin to support alternative, ethical methods of conservation and income generation.  This would be a win-win for all.

Except, perhaps, for those who just enjoy the thrill of the kill.