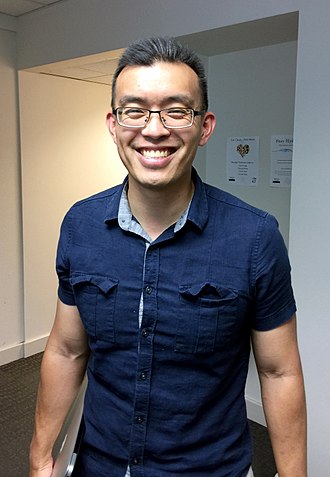 Direction Action Everywhere’s Wayne Hsiung has drawn on his background to shape the grassroots group he founded into one of the most influential animal rights organisations in the world.

The following is an excerpt from Wired Magazine’s recent article about Hsiung and DXE.

“Wayne Hsiung grew up in a small town in Indiana, the son of two Taiwanese immigrants who moved to the US so that his father could study chemistry and later take a job as a scientist at Eli Lilly. His parents had spent periods of their own childhoods going hungry in the wake of China’s civil war, and they were delighted to discover that Americans ate meat at practically every meal. But Hsiung, one of only two Asian children in his classes, was deeply lonely, ostracized, mocked and bullied for his race and accent. He begged his parents to get him a dog, a mutt he found in the classified ads, who he says became his best and only friend.

Not long after, when Hsiung was 8, his family took a trip to mainland China to meet relatives for the first time since the split between communist China and Taiwan. But Hsiung’s most vivid memory from that trip remains a dinner his extended family held at a “wildlife” restaurant in Guangzhou, a controversial southern Chinese cuisine that specializes in exotic animals. Hsiung remembers live snakes, raccoons, dogs, and monkeys all captive and available for diners to choose from. Request one, and it would be killed and cooked on the spot.

Hsiung was horrified. He dreamed of the animals’ screams for months, he says. “First, that trip instilled in me from a very young age, incontrovertibly, that some of the things we’re taught by authority figures must be wrong,” Hsiung says. “Secondly, I learned that there was something fundamentally flawed about the way human beings interact with animals.”

When Hsiung was 15, a boy from his school ambushed him, held him down, and slashed his face with a blade. His parents were scared enough by the incident that they allowed him to apply to college early, and he enrolled at DePauw University in Indiana when he was only 16; the next year he transferred to the University of Chicago. College was another turning point in his life. He read Animal Liberation, the seminal animal rights tract written by the philosopher Peter Singer, which laid out the argument that all beings should be treated in accordance not with their intelligence but with their capacity to feel pleasure and pain, the core tenet in the fight against what Singer calls “speciesism.” Soon Hsiung became a vegan, a Buddhist, and then an animal rights activist, leafleting on campus and handing out DVDs of the People for the Ethical Treatment of Animals’ documentary Meet Your Meat.

Over the next few years, Hsiung started down the path of a career in behavioral economics and law; at one point he ­cowrote a paper with his mentor, the nationally influential law professor Cass Sunstein, on how climate change would impact animal populations. He was fascinated by Sunstein’s theories of social change—how surfacing implicit preferences or emotions in individuals can trigger social “cascades,” chain reactions in which a person’s admission of their unspoken feelings or experience can unlock many others to do the same. But over time he began to feel detached from his legal studies and depressed about the academic future ahead of him.

So one night, on a whim, he decided to trespass into a slaughterhouse intending to rescue an animal. Chiappetti Lamb and Veal was one of the last operational meat facilities in urban Chicago, a building Hsiung had walked by repeatedly, whose smells and sounds had haunted him. He entered around 2 am, simply opening a gate and walking in.

Inside the company’s stockyard, he found an enclosure of baby cows and lambs cowering in the corners of their pens. He hadn’t bargained for the animals’ size and quickly realized he wouldn’t be able to take any of them out by himself. He left empty-handed but found himself returning to the slaughterhouse again and again. On some of those trips he brought a cheap point-and-shoot camera with him. But the resulting photos never quite captured the feeling of being there. “The key details—the quivering of the lambs, the patches of rotting skin—were lost,” he would later write. “And the earth-shattering experience of being surrounded by baby animals suffering in filth would remain locked in my mind.” (The company that now owns the Chiappetti facility said it couldn’t comment on its conditions in the early 2000s.)

By that time, Hsiung was working as a visiting law professor at Northwestern University. But he decided to quit his job. He spent the next four years breaking into slaughterhouses and farms around the country by night to rescue animals, working as a full-time activist until he ran out of money and then taking jobs in corporate law to raise enough to continue. Those early operations were anything but open rescues—even now, Hsiung refuses to share details about them, claiming that doing so would endanger collaborators in fragile legal situations. Still, they allowed him to hone the playbook that DxE would use years later, scouting targets, practicing investigative techniques, learning about the supply chain of the US meat industry.

From the beginning, Hsiung believed open rescues would be far more effective. “If we really believe in what we’re doing, we can’t be scared to show people,” Hsiung says. But to take that risk, he’d need a grassroots movement and a media strategy strong enough that every prosecution or lawsuit the group’s rescues triggered would only amplify its message and recruit more followers.

Before cofounding Direct Action Everywhere, Hsiung attempted to launch four other groups, each of which fell apart in turn. Finally, in 2012, he moved to the Bay Area and tried a different strategy, emulating the group Improv Everywhere, whose performance art stunts had gone viral on social media. DxE tried applying the same tactics to animal rights protests, staging die-ins at Chipotle restaurants around the country or lining up to read poems in front of a grocery store meat counter while employees hurled abuse at the protesters.

In 2014, DxE carried out its first open rescue, breaking into a Petaluma, California, egg farm that supplied what it claimed were “cage-free” eggs to Whole Foods. Inside, the activists recorded video that showed hens crammed into crowded sheds—hardly what most consumers would imagine “cage-free” means—and taking out two symbolic hens that they left at an animal sanctuary. (Whole Foods declined to comment for this story.)

By the time DxE released that video, in early 2015, Hsiung had his eyes on a bigger target: Circle Four Farms, one of the world’s largest pig farms. The sprawling facility in Milford, Utah, which belongs to the Chinese-owned conglomerate Smithfield Foods, reportedly sends 1.2 million pigs to slaughter every year from its hundreds of barns, a complex that DxE nicknamed the Deathstar.

In 2007, Circle Four had pledged to phase out the gestation crates that keep pregnant sows practically immobile. In 2013, the company released a YouTube video that showed its new group housing system, with animations and cheery music. Hsiung was skeptical of those claims, which entailed a massive project that Smithfield had said would cost $300 million. So he and DxE began to make plans to go in and see the farm for themselves”.