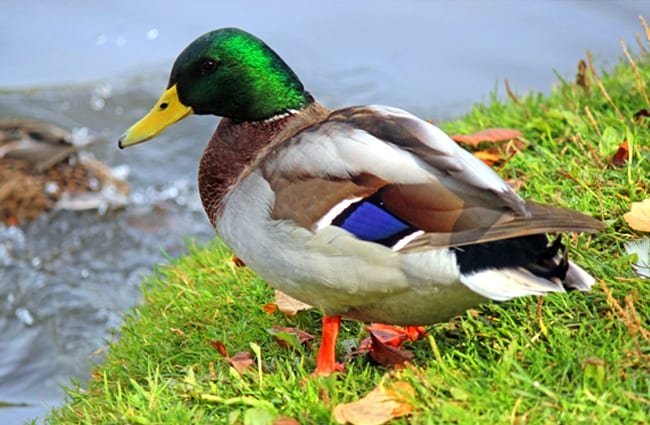 On the Eve of the New Zealand duck shooting season opening, End Animal Slaughter contributor Paul Judge calls for an end to the carnage.

As I write, the murderous mayhem of duck-shooting season has been given the go-ahead by the government during New Zealand’s level-2 Covid-19 lockdown.

I walk down to my favourite spot on the Waikato River most evenings. I hear the ducks as I approach, quacking away and going about their duck business. And there they are, on the river’s edge sitting calmly in their flock, or sometimes, led by a brave duck, waddling up the bank to look for food. Something will suddenly spook them and they all take off into the air as one, swooping past me with flapping wings, circling way out over the river before settling again on the sandy beach. These are the lucky ones, I think to myself. As long as they stay here they will escape the horrors of the hunters’ guns.

How I loathe duck shooting. It is so obviously cruel I cannot understand how it is still legal. Australian studies show that around one in four ducks are not killed outright, but instead fall to the ground mortally wounded, dying an agonising, lingering death. While a good percentage of geese and swans are monogamous, ducks can also pair bond for extended periods.   If a single duck manages to survive the carnage duckshooting causes, then they will ‘mourn’ the partner they bonded with.

The mayhem and murder is not only normalised by the media but is celebrated. Blokey, camouflaged duck-shooters are shown stocking their maimais (concealment huts) with beer and talking about how it’s the best thing since Christmas. Small children are dressed up in identical camouflage to their proud dad’s and declare on camera that they have shot their first duck. Often the children will speak with trepidation in their voice, not understanding fully why they have killed a beautiful living bird. 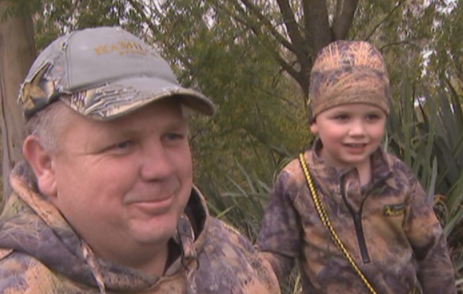 When it comes to duck shooting, the law is truly an idiot. The large numbers of maimed, wounded ducks flies in the face of humane slaughter laws in the Animal Welfare Act. Duck-shooting should be banned on these grounds alone. I know it will be a long battle, given the powerful enculturation of the practice, and I will never give up the fight to see it happen. But there is another Act of Parliament that can and should be properly updated – the Wildlife Act 1953.

When it comes to duck shooting, the law is truly an idiot. The large numbers of maimed, wounded ducks flies in the face of humane slaughter laws in the Animal Welfare Act. Duck-shooting should be banned on these grounds alone.

All New Zealanders should know that some species of native duck, which are in decline or classified as endangered, are allowed to be shot under the Law.

Notwithstanding the regional variations regarding bag limits, the hypocrisy of killing our native species is absurd. We spend millions of tax-payer’s dollars – expensive aerial poison drops, hours upon hours of both government paid work and unpaid volunteer work – protecting our precious native birds. To allow our native species to be slaughtered makes absolutely no sense.

The only ducks that are legally protected in New Zealand are the Brown and Grey Teals, (Patekeke and Tete Moroiti respectively),  NZ Scaup (Papango), and Blue Duck (Whio).  Native species so recklessly assigned to the carnage are the Grey Duck (Parera), the Shoveler (Kuruwhengi) and the Paradise Shelduck (Putangitangi).

The Grey Duck is in rapid decline and has been declared “critically endangered”.  It is thought to be extensively hybridised with the mallard, and this hybrid is allowed to be hunted.  Good luck with telling the difference!   The true Grey Duck is in danger from being shot by hunters as both sexes look similar to the female mallard.   The Grey Duck has a pattern of stripes from the bill and over the head.  The general similarity of appearance to the mallard is one very good reason to ban all duck-shooting. 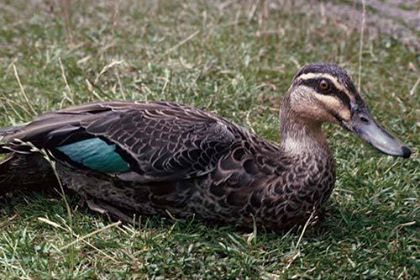 The introduced Mallard is, of course, the most common duck. We see them almost everywhere, the female with her uniform, dull brown feathers, the male with his handsome, dark green, iridescent head and neck feathers. These ducks are considered pests. They apparently disturb the replanting programmes along the waterways and they overcrowd the wetlands for native species. What? Hang on a minute. We are shooting the native species! And as for overcrowding, wetland habitats have been devastated in this country, largely due to intensive agriculture. 90% of our original wetlands have been destroyed. And it’s the duck’s fault? 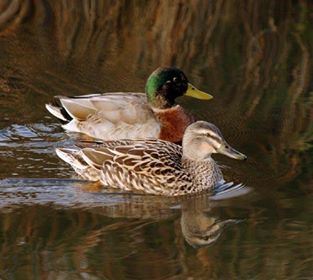 Conservation of remaining wetlands is a contentious issue in the duck-shooting debate. The hunters become ‘greenies’ in regard to wetlands, but only in order so there will be plenty of game next year to carry out their blood-sport.

The native Shoveler duck also deserves immediate protection.  It is estimated about 30,000 of these birds are killed every hunting season. That’s around 20% of their total population. That is not sustainable and certainly not acceptable. Once again, the females look quite similar to the plainly embellished female mallard. The male Shoveler, however, must be New Zealand’s most handsome waterfowl, with his blue-grey head with white vertical stripe between eye and bill, his striking reddish-brown breast and blue wings.  It is inconceivable that such a bird, endemic to New Zealand, can be legally shot. 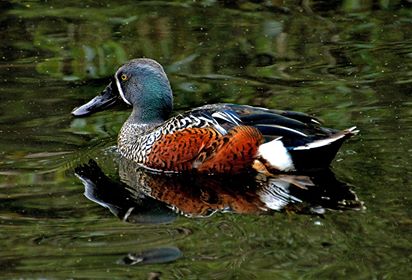 The Paradise Shelduck is sometimes mistaken for a goose, possibly due to the male’s goose-like honk or the female’s white head. The male Shelduck is a uniform black or dark grey with green iridescent head feathers, while the female is a chestnut brown with a distinctive pure white head and neck. After the mallard the Paradise Shelduck are the most abundant waterfowl in New Zealand. Ironically, they have increased their numbers since colonisation due primarily to their ability to adapt to feeding on grassland. Thus farmers see them as a pest and shoot these beautiful creatures relentlessly.

Of an estimated population of 700,000 about 200,000 are shot annually. And this is a native bird! Under this logic, Will we see the hunting of kiwi if the conservation programmes are hugely successful and their numbers increase? 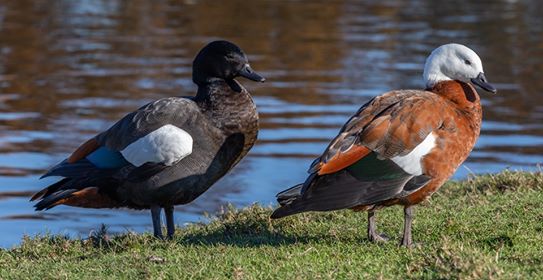 The Paradise Shelduck was listed in 2008 as “not threatened”. That, of course, seems an absurdity given the overall decline of all waterfowl species since that date. Habitat loss, predation, overhunting and extreme weather events due to climate change are taking their toll on even the abundant mallard, so much so that the 2015 season was shortened to one month, with bag limits for all duck species reduced.

And why is the beautiful, iconic Pukeko, another native to Aotearoa, allowed to be killed en masse? Large numbers of these stunning birds are killed ‘for fun’ by duck-shooters. Conservation groups have estimated 50,000 are killed each season. But Fish & Game say this is wrong, and that only 20,000 are killed. Hold on a minute. That’s a bit like saying the use of napalm in the Vietnam War was not so bad because the civilian death count was over-estimated. 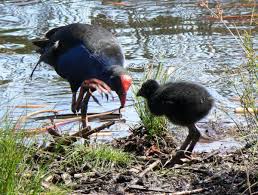 The Pukeko is almost as iconic a bird as the kiwi. Check out any tourist trinket shop and there they will be, adorning ceramic tiles, headscarves, countless prints and paintings. Killing the Pukeko is as dumb as the Australians killing the kangaroo, an animal that adorns the tail of the Qantas aeroplanes, the national symbol. Shhh! Keep quiet, we don’t tell the tourists anything about this.

All duck shooting is unacceptable, but native birds still being shot in this country is a total outrage and simply beggars belief. The Wildlife Act of 1953 is in urgent need of extensive revision.

The most well-known of our protected ducks, thanks to the media coverage of conservation efforts, is the Blue Duck (Whio). But here’s an idea; let’s protect all the native ducks shall we? Or better yet, all the ducks, native or otherwise.

But here’s an idea; let’s protect all the native ducks shall we? Or better yet, all the ducks, native or otherwise. 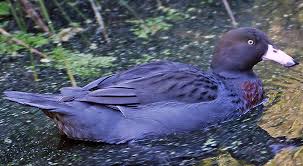 With the Covid-19 pandemic the world is in crisis, but are we learning anything? Are we looking at the root causes of this catastrophe? Are we examining our relationship to our evolutionary partners who we exploit and maim and kill in the most horrendous ways?

Can we not even develop a new empathy for those we define as our prey, when we ourselves are experiencing the horrors of becoming prey to a biological enemy out to destroy us?

And before the Covid-19 crisis there was the biodiversity crisis. Well guess what? That is still happening, and overhunting, along with habitat loss, pollution and climate change, is a root cause.

There is so much morally and ethically wrong with duck shooting – the scale of the suffering of the birds, the enculturation of children into violence, the poisoning of the environment with lead (yes, still used, not to be phased out until 2021), the list goes on. But to put endangered native species in harm’s way every duck shooting season is incomprehensible, and cannot be allowed to continue.

Paul Judge (seen here with his beloved companion goat, Robert) is a filmmaker and animal rights activist. He taught film production in the tertiary education sector for 17 years.