Ducks Out of Water: The Cruel Reality of Duck Factory Farming 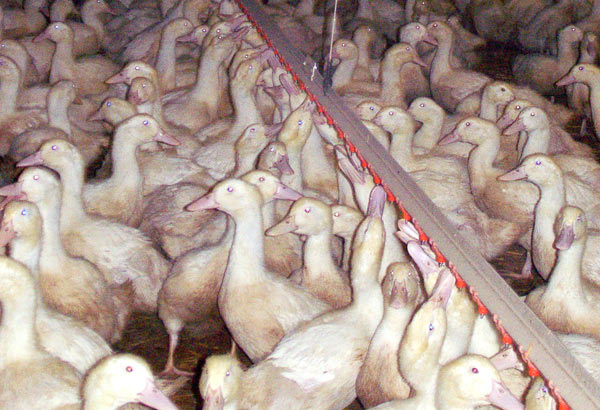 Farmed ducks, like other poultry raised for food, suffer greatly.     As with all intensively farmed animals, ducks in factory farms are deprived of their most basic needs.

They would like to be able to fly, forage, choose a mate and live for 15 years or more, but the life they are forced to endure couldn’t be more different.  They  live inside dark, filthy sheds with up to 10,000 other birds, and never feel the warmth of the sun or enjoy swimming. Except for drinking, animals that have evolved to eat, swim, dive, clean and play in rivers, lakes and ponds, have no access to water at all. Without water they cannot preen, their feathers deteriorate, and they can lose body heat.  They need water to cleanse their eyes, and many develop eye itchiness and other eye diseases, and some even become blind. 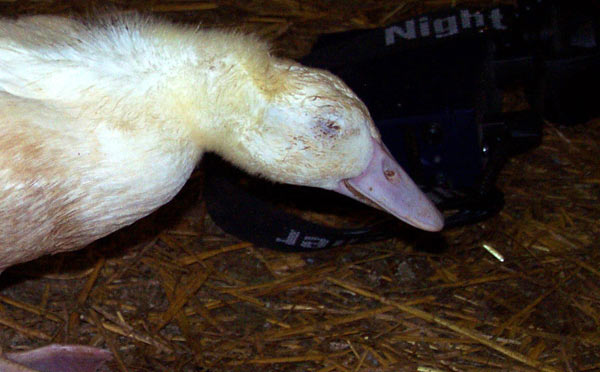 Mother Ducks cannot even sit on their own eggs, as the moment they are laid they are taken from under them and placed in incubation chambers. Because they are bred to produce as much meat as possible in the shortest time, the ducklings grow quickly, and reach slaughter weight at around just 7 weeks old.  Even before then some become lame with painful leg deformities their weight gain causes, and standing all day on litter-strewn floors can lead to painful ammonia burns on their skin.   Many fall onto their backs and are not able to right themselves, there is no one to right them, no one cares,  there is virtually no one to care: in one UK based company, the most intensive enterprise of its kind there are as many as 85,000 birds tended by only one person. Consequently these poor creatures die a frightening and protracted death as they struggle in vain to right themselves.

In the wild ducks are swimming most of the time, eating plankton, seeds, plants, insects and worms, instead of the dry pellets they are fed in the sheds.    On top of all this suffering, they are also neglected and sometimes deliberately abused by sadistic workers.   In 2014 and 2016 employees at two US farms, Reichardt Duck Farm and Culver Dark Farms, were videotaped tormenting ducks to death by bashing them against walls, and ripping off their heads.   They were videoed callously throwing, dropping and roughly handling ducks and ducklings by their heads and wings.  The undercover cameras also showed animals with ripped-off body parts stuck in wire mesh flooring, and birds were seen trapped in manure pits below the floor.

The extract below is from a recent Viva campaign.

“Modern farming techniques have turned the fluffy Easter duckling image into a sick joke. 19 million ducks were slaughtered in the UK in 2005 (in the mid 1970’s the UK duck population was barely a million). We know what these birds lives are really like because we have investigated several duck units. Twice we visited Manor Farm Ducklings, who then supplied Marks & Spencer. On our first visit, we saw thousands of fluffy, yellow ducklings in stinking, windowless sheds. Some could barely walk and dragged themselves across on their wings. Others had fallen on their backs and were unable to right themselves and this is how they would die – a horrible, stressful death. Many had already lost the battle to live and their little corpses were scattered amongst the straw. One duckling had fallen behind machinery and was hopelessly trapped – calling desperately for a mother who would never come.”

Duck is a traditional French food,  and is especially popular in Chinese cuisine where it is considered a rich delicacy, and most commercial dark farms supply restaurants directly.  When we eat duck, and the flesh of other factory farmed animals, we are causing them continuous suffering.  There is only one way to prevent cruelty to sentient creatures raised for food, and that is to make the commitment to go Vegan.

Take the pledge to go Vegan for the month of January, 2020.