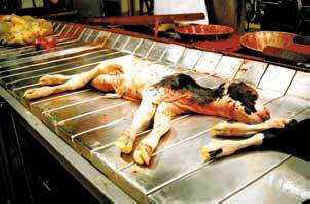 What could be more barbaric than taking an unborn fetus, draining its blood, and then throwing it on a pile to be discarded?   End Animal Slaughter’s Sandra Kyle writes about yet another horror at the slaughterhouse, a direct product of the dairy industry: the collection of fetal bovine serum.

In meatworks all over the world a small percentage of cows arriving for slaughter are pregnant.  Their foetuses can be at any stage of development, from first to third trimesters, and some are already full term.   In 2017 in New Zealand, the Ministry for Primary Industries recorded 22 births on slaughter trucks or on arrival at the slaughterhouse.

In the UK, the British Cattle Veterinary Association estimates that 150,000 pregnant cows are sent to slaughter each year, at least 40,000 of them in the last stages of their pregnancy. The calves they bear,  they speculate, could possibly be capable of independent life.

Gabriele Meurer MRCVS, a former official veterinary surgeon in UK abattoirs, left his job, and the country, in disgust at what happened to pregnant cows and their foetuses.  He wrote in 2017:

“What is happening right now in British slaughterhouses is quite simply a scandal. Sometimes when these creatures are hanging on the line bleeding to death, you can see the unborn calves kicking inside their mothers’ wombs. I, as a vet, am not supposed to do anything about this. Unborn calves do not exist according to the regulations. I just had to watch, do nothing and keep quiet. It broke my heart. I felt like a criminal”.

In many parts of the world, including in New Zealand, the unborn foetus has a use before it is discarded.  Its blood is collected to sell to pharmaceuticals and laboratories as a medium to grow cells in in vitro cultures, to be used in a variety of procedures such as fertilisation, and the formation of vaccines.

When human cells and tissue are grown in a culture form, a source of nutrients, namely hormones and growth factors, must be added. The usual supplement comes from cows’ aborted fetuses.  The fetal blood, called fetal bovine serum, is considered to be a rich source of nutrients.

The harvest of foetal bovine serum has been operating in New Zealand for at least 25 years. It is a lucrative industry.  Each calf produces on average about 300ml, and while farmers receive around $50.00 extra per harvest – more if the fetus has gone full term – it can fetch up to $2,500 a litre.  Worldwide, it is estimated that more than one million aborted bovine fetuses undergo this procedure every year.

After slaughter and bleeding out of the cow at the abattoir, the mother’s uterus containing the calf fetus is removed when she is being disembowelled, and her feet and head are being severed.   The fetus, still alive, is then transferred to the blood collection room.  A needle is inserted directly into its beating heart (the heart needs to be beating to collect sufficient serum) and the blood is vacuumed into a sterile collection bag in order to minimize the risk of contamination with micro-organisms from the slaughterhouse environment.

It is variable as to what level of awareness the calves have. However, no anesthesia is given to them, despite their possible ability to experience pain and discomfort.

The harvesting of aborted calf’s blood is beyond barbaric, and is another direct consequence of the cruel dairy industry.  There is no need to be using calf blood to add nutrients to in vitro cultures, as there are other substances that can be used as replacements.

Such atrocities exist because we choose to eat meat and dairy products.  We can make the decision today to eliminate cruelty from our plate by  beginning the transition to a vegan diet.