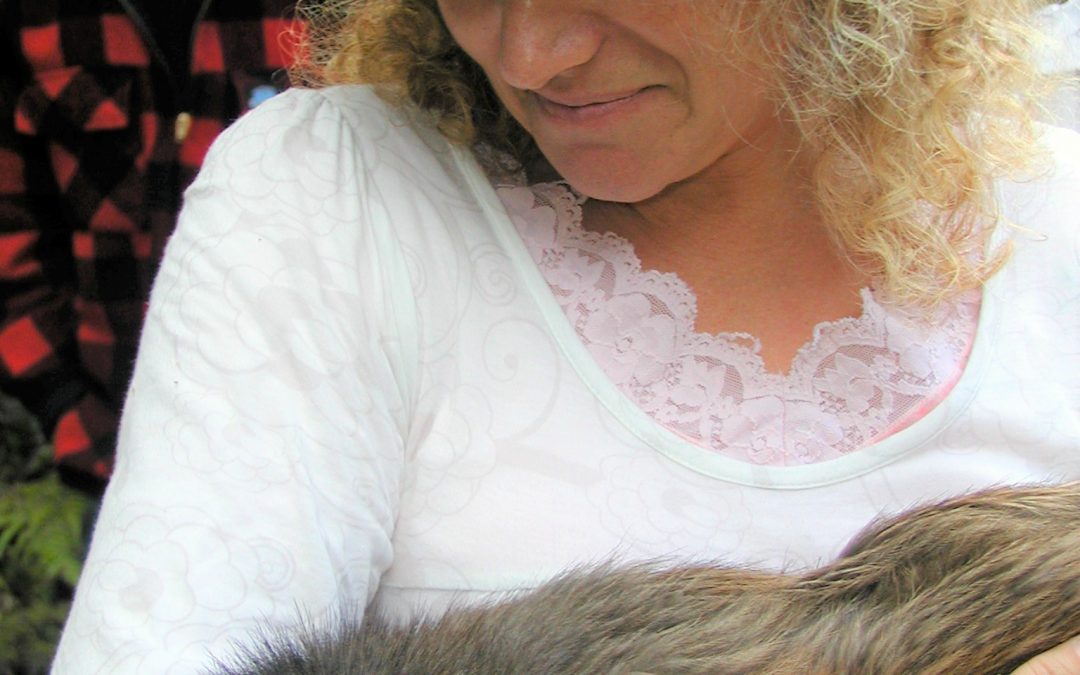 In this poignant article animal activist and Lead Agriculture Campaigner at Greenpeace Aotearoa, Christine Rose, shares memories of growing up on a pig farm.

The pig sheds of my childhood were like something out of a Dickens nightmare. The low light, the air thick with dust, the sounds and smells of hundreds of animals, eternally contained. 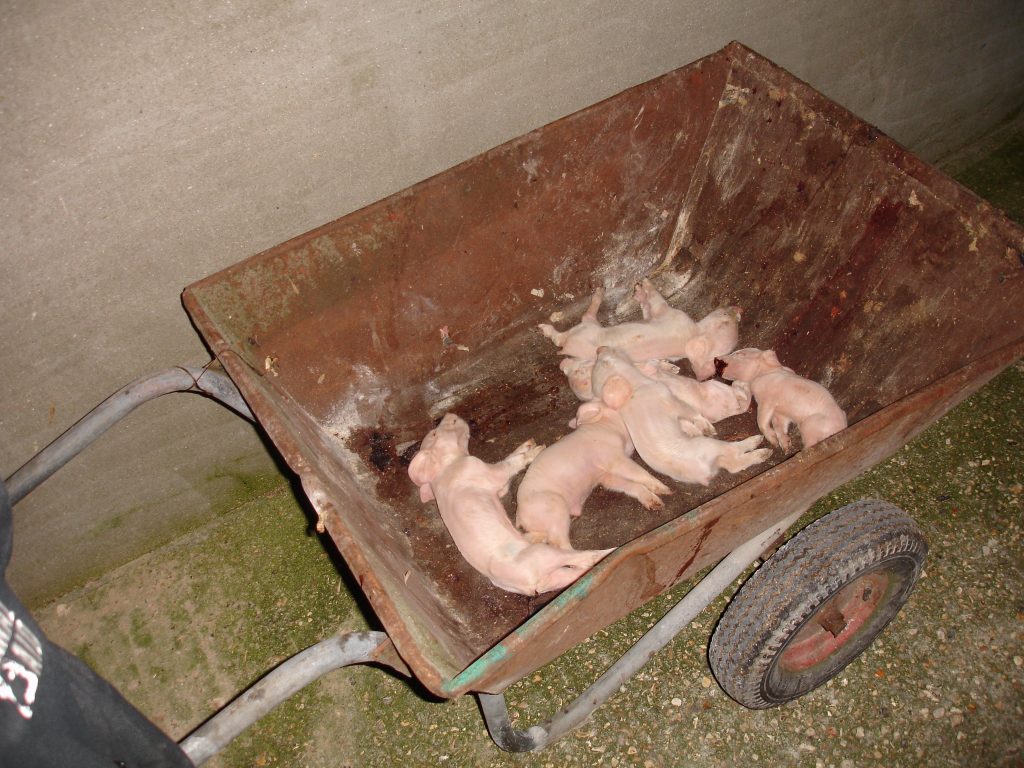 The floors were old wet and cracked concrete; the walls, fibrolight, with wooden flaps covering unglazed windows. In winter it froze, in summer it cooked. Every day, on Dad’s rounds, he would pull out dead piglets from the pens and put them in a barrow, headed for disposal. Ultimately their destinations were the same, young or older, pigs came and went by the hundreds through the years of my childhood. Legions without a life worth living, space, sunlight or love.

Ultimately their destinations were the same, young or older, pigs came and went by the hundreds through the years of my childhood. Legions without a life worth living, space, sunlight or love.

Some sheds held the weaners, as many fast-growing youngsters crammed into each pen as could fit. Bleaker and more boring than a penitentiary. No break from routine or boredom, no sunlight, mud or shade, no touch of the wild or natural world. In a departure from standard procedure, my dad, who was a low paid worker, sometimes hung some wood on a string for them to play with, some small element of enrichment. It was a wee act of kindness in a short life long on oppression and brutality.

Dad sometimes hung some wood on a string for them to play with, some small element of enrichment. It was a wee act of kindness in a short life long on oppression and brutality.

Other sheds housed the sows, each mother trapped in a crate where she couldn’t turn, couldn’t move, couldn’t nuzzle her young. Her piglets were in the wider pen, tiny, velvety and pink but without maternal contact or the chance to express their true ‘pigness’.  Their little upturned snouts all wrinkly and curious, at first they were oblivious to the cruelty of the system they were part of. But they were denied nests, soft bedding, smells and textures of the outside world in generations before they were born, and in generations to come. 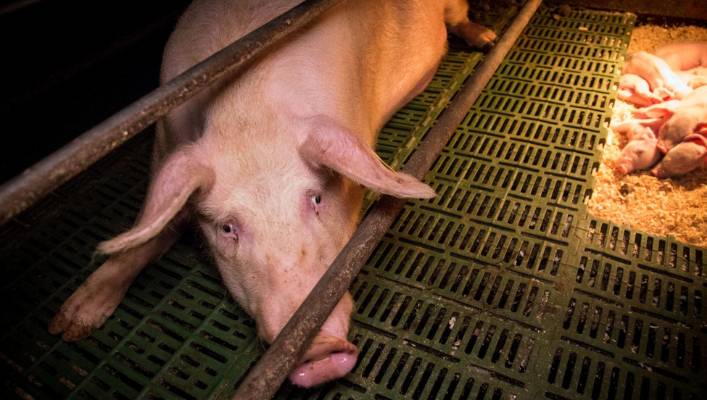 Out the back of the main piggery were other pens, for single sows, each one just high bare walls and a spartan shelter, without bedding, grass, or the sight, support, and socialisation of a herd. Only the boars roamed free, in paddocks with sheds for shelter and wallows. Beyond the sheds were the oxidation ponds, the offal pit, the final horrors in a system of misery.

Sometimes we’d have a runt to take care of, that we would bring back from the edge of early death. Little Pink Pettitoes was one such weakling. She’d run through the house wagging her curly tail, following us like a puppy. She’d suckle our fingers and gumbooted toes, come when we called, lie on the floor in the lounge, an honorary child. Until she was well enough, recovered, and returned to the piggery, no longer a name but a number. Such was the life on a pig farm. Pigs were pets one day, sausages the next.

She’d run through the house wagging her curly tail, following us like a puppy. She’d suckle our fingers and gumbooted toes, come when we called, lie on the floor in the lounge, an honorary child. Until she was well enough, recovered, and returned to the piggery. 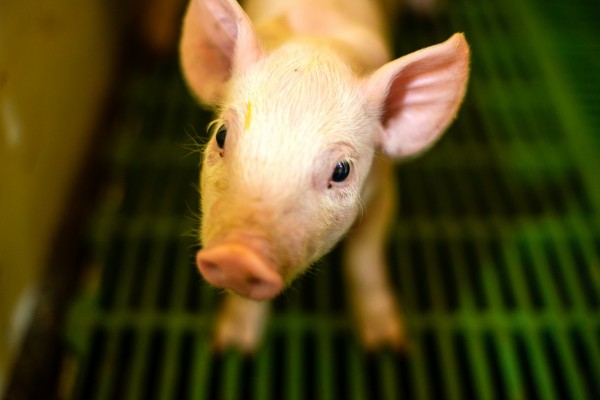 Despite being kids, we weren’t spared the brutal reality of pig ‘husbandry’. When the time for castration came, my dad would remove the piglets from the farrowing pen, take them in a shopping trundler down the back of the shed, and one by one, chain the young male piglets upside down in a rudimentary metal cradle. He’d cut around their genitals with a scalpel and pull out the scrotum and other stringy bloody bits, and pour some iodine on the wound. He’d trim their teeth and chop off their tails with what looked like wire cutters, and put the screaming piglets in the growing pen, where they’d spend the rest of their lives, getting fat for slaughter and human consumption.

For home use, three or four pigs were put in a cage on the back of the tractor. They were removed one at a time, and man with a gun would shoot them in the head before cutting their throats, while the others still trapped, watched and waited their turn. Their screams haunt me still. They’d bleed out on the dusty apron in front of the shed. They were hung upside down, gutted, reduced to innards and guts and blood. They were put in a hot bath of water where their hair was burnt off, and they were butchered into meat cuts, and ‘choice’ pieces were pickled for bacon and ham. Sometimes the heads were taken home and kept in the big deep freeze. Boiled up later for brawn, they’d stare out at us whenever we took out a loaf of bread or other frozen goods for dinner.

Boiled up later for brawn, they’d stare out at us whenever we took out a loaf of bread or other frozen goods for dinner.

These days they don’t castrate male pigs, they’re killed before they sexually mature, a marginal improvement. Sow crates are banned, but farrowing crates are legal. There’s not much difference between the two. They both deny mothers the chance to express innate and essential behaviour – like turning around, moving about, nest building, nurturing of young.

My dad no longer farms pigs. But there’s a pig farm near where I live, where familiar atrocities remain. My childhood love for pigs prevails, so does the haunting of my heart for the way they are treated. There are less than 100 pig farms in NZ now and not all of them are so archaic, though less than 2% are truly free range. Farrowing crates are still the norm, and even new piggeries deny sows the chance to turn around – in cages visibly too small. Farmers say separating the sow from her babies helps address piglet mortality, but they breed sows for so many piglets, that they’re small and vulnerable, so of course the death rate would be high. MPI’s online ‘pig space calculator’ shows how grotesque modern practices remain acceptable to authorities who should be more responsible for their welfare. You’re allowed 125 25kg pigs in a space that’s just 30m2, smaller than some peoples’ lounge. You’re allowed 252 50kg pigs in a space 100m2, smaller than an average house.  As bad as this confinement is, it’s legal and considered a high animal welfare standard, and with more than 60% of pork eaten in NZ imported from overseas (Spain, Canda, the US), where there are even worse rules – or none at all, pig farming – and eating, is immoral and indefensible. There can be no justification for taking a pig’s life for the passing pleasure on the palate.

The latest indignities we inflict on pigs is to use them in xenotransplants. Scientists breed pigs especially for their organs to be transplanted into people. We recognise they are enough like us that their organs and ours are interchangeable. But we deny that they’re enough like us to warrant rights to lives worth living, to flourish and express their natural behaviours. Those curious, smart, funny, friendly, witty and loyal animals are no less than dogs – or humans. We shouldn’t treat a human or a dog like this, and we shouldn’t do it to a pig.

AND NOW FOR A MUCH HAPPIER STORY:  End Animal Slaughter rescued these three pigs who were going to be killed, and safely rehomed them in a sanctuary where they will live out their lives happy and free.  Meet Happy, Lucky and Hope! (Tik Tok by Summer Aitken, Video by Chris Huriwai.)