Horrific slaughter of whales in the name of culture and tradition 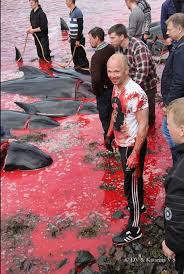 Although the International Whaling Commission was set up in 1942 to help whales recover from over-hunting, whale slaughter is still carried out by nations who defend it as their cultural heritage.

Last week the waters of a peaceful bay in the Danish Faroe Islands turned red as their annual whale hunt took place.  End Animal Slaughter contributor LYNLEY TULLOCH describes the gruesome killing of whales in the second of her ‘Slaughterhouses of the Sea’ series.

Recent reports of a whale hunt (called a grindadráp, or grind) in the Faroe islands, 400 miles of the coast of the UK, gave me the chills. This was the tenth grind this year, where 536 pilot whales have been killed in total,  butchered after fishermen drove the whales into shore. They were slaughtered without mercy as the sea turned red (feature photo). Images of children and adults dismembering the whales amid laughter and chatter, while tourists snap photos, is horrifying.  One photo showed a fully formed pup lying perfectly formed, nestled among her dead mother’s organs. 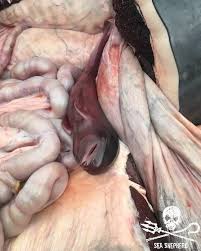 A perfectly formed pup inside their butchered mother

The Faroe islanders  call their whale grind, practiced since the time Norsemen first settled there,  a humane and sustainable custom. They say that respect is shown to the whales. And yet reports suggest that it is a depraved blood fest with many whales dying prolonged and agonizing deaths. Attempts to paralyze some whales with a lance before killing them has multiple failure attempts. After paralyzing them, men tie ropes with metal hooks around the whales and drag them to shore to be killed.  They slice through the whale’s spinal cord and main artery, keeping one hand behind the blow hole. The blood flows into the water staining it a bright red. And they carry this out amid children.

Reports suggest that it is a depraved blood fest with many whales dying prolonged and agonising deaths.

Pilot whales are not actually whales. They are part of the dolphin family, but get very large. They are generally friendly and sociable, and do not usually harm humans.  It makes their horrifying deaths excruciatingly sad.

New Zealand has its own horror stories when it comes to whales. Despite currently having some of the best whale protection laws in the world, we once killed whales with the same abandon shown by the Faroe islanders. Research by Anne M Creason has shown that “Visitors to New Zealand in the mid-1800s commented on the indiscriminate practices of whalers in killing female whales and calves. Creason argues that Maori people traditionally consider whales as taonga (treasure), a sacred gift from Tangaroa (God of the sea) and that this has heavily influenced the strong whale protection stance we currently have.

Culture most definitely influences our views and treatment of nonhuman animals, and whales are no exception. Commercial whaling has been banned in most countries owing to concerns of extinction from over hunting during the 18th and 19th centuries. The International Whaling Commission (IWC) was set up in 1942  to help whales recover. On 23 July 1982, members of the IWC voted to implement a pause on commercial whaling and signed a moratorium.

But not all nations are on board with this. There are still three main whaling nations – Japan , Norway and Iceland. These nations practice commercial whaling.  Norway filed an objection to the moratorium, and now kills more than 400 minke whales a year. Japan has recently withdrawn from the International Whaling Commission and so is no longer subject to its laws. In Japan whale meat is highly prized. After 30 years of no commercial whaling, it has begun the killing again, in earnest. Even before this, Japan killed whales for what it claimed were ‘research purposes’. For example, last year, under the banner of research Japan went into Ross Sea – an area of the Antarctica set aside for special protection – and killed 50 minke whales. 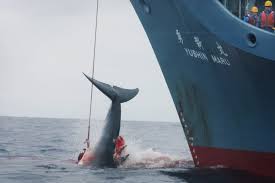 ‘Bombed’ whale is hauled into a Japanese whaler

The worst part is that commercial killing of whales is a destructive and violent act, causing immense pain and prolonged agony in many cases. Commercial whaling fleets kill whales with an explosive 30-gram penthrite grenade-armed harpoon. They often finish the job with a second grenade and high powered rifles.  The explosives go off once the harpoon is embedded a foot into the whale’s flesh. While this is supposed to cause sufficient brain damage to knock the whale out in seconds, it is definitely not an exact science.