I Am Not A Hamburger 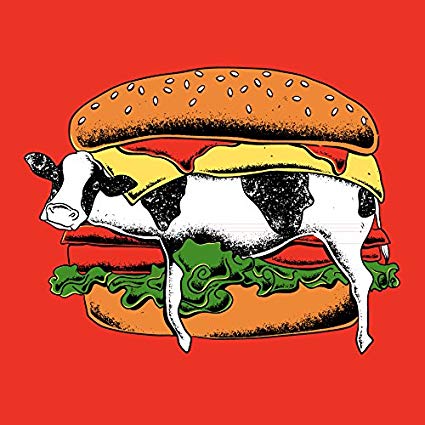 Should cows have the right not to be placed in a hamburger?  End Animal Slaughter Contributor LYNLEY TULLOCH thinks they should.

New Zealand-owned Pizza chain Hell was recently in the news when they covertly added a Beyond Meat patty to their burger pizza.   It is suggested that they were in breach of the NZ Fair Trading Act, which protects consumers from being misled. 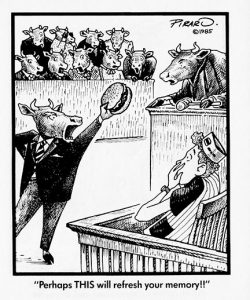 But what is reasonable for the consumer is not necessarily so hunky dory for the bovine. In fact, if bovines were extended human rights they would well and truly be on solid ground to seek legal remedy. They would no doubt ask to make it illegal to murder bovines in order to put them in a burger patty, or on a pizza, or for any other reason.  If a bovine had the same rights that are bequeathed to humans under the Universal Declaration of Human Rights it would be complete pande-moo-nium.

Let’s face it, by being made into a burger the bovine has a substantial amount of her rights breached. These include her right to life, health, liberty, self-determination. equal protection of the law, nondiscrimination and protection against torture.

The bovine’s right to life seems to be a pretty clear cut case,  seeing that she has ended up as a medium rare patty in your burger. To get there she had to be dead. You may be ok with this. but the bovine, bless her, is probably not. I think I am in pretty safe territory when I say that no bovine goes to his or her death willingly, especially for no other purpose than to fill space between two bread buns alongside the lettuce and tomato. 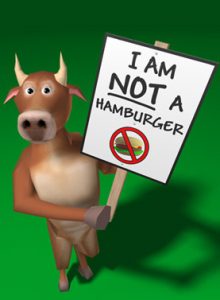 If a bovine were accorded the right to good health she would also not end up in a burger. Not only is eating burgers bad for the bovine’s health, but also for yours. Meat eating is linked to many cancers, specifically colon cancer. It is also bad for the heart, causing fatty deposits which contribute to heart disease. It goes without saying that eating burgers is bad for the bovine’s heart which, not to put too fine a point on it, must desist in order for her to become a burger.  Meat, as the saying goes, ‘stops a beating heart.’

And what about the bovine’s right to self-determination? The bovine currently has none. She is caught up in a system where her very existence is predicated on her demise. Her life is determined by others, who seek to profit from her death. Years of domestication have rendered her docile enough to keep captive until she is deemed ready for the slaughterhouse. She may be used to breed other calves for meat, or her body may be used for milking before it is spent and sold off as cheap hamburger fodder or pet food. There is no self-determination for bovines at any stage of their short existence.

As for equal protection of the law, the bovine has none of this either. She is not protected, as humans are, from murder, forced impregnation, denial of liberty, or incarceration. She is at the mercy of the laws of the country she was born into that determine acceptable ‘welfare standards’ for her upkeep. However, these are routinely transgressed, and in some countries completely absent.

The right of bovines to nondiscrimination is clearly flouted. Bovines, like other animals who are farmed, are discriminated against on the basis of their species. She may be born into a bovine body, but she is still able to think, feel, hope, fear, and form attachments. Just because she is a bovine, does not mean she is not an individual whose life matters to her. Despite this, she is discriminated against, simply because she is a bovine. 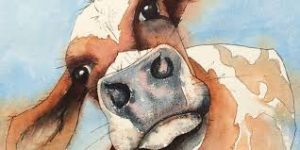 What about her right to protection against torture? Surely we don’t torture bovines? Sadly, we do. They have their horns burned off, with 97% of New Zealand farmers using the hot iron cautery method.. If the calf is less than nine months old it is recommended pain relief is used, but this is not a legal requirement. Young male calves often have tight rings put around their scrotum so the blood supply is cut off,  causing the testicles to drop off. Some bovines used to have their tails cut off,  but since October 2018 this is illegal.  The law grants small mercies. Bovines also often experience distress by being given inadequate shelter, braving the wind, rain and biting cold in winter and the hot sun with no shade in summer. When they are transported to the slaughterhouse bovines are put in trucks and electric prods may be used to move them along. They often travel long distances in hot conditions only to arrive at the gates to Hades Underworld, with a one-way entry ticket purchased on their behalf. They come out in dismembered pieces; even in death they are not given any dignity. 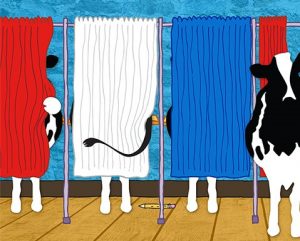 It would be disingenuous to suggest that all human rights be extended to animals. For example, the right to education and freedom of religion and participation in government would be a trifle bizarre. No one really wants a bull lining up at the polling booth, horns and balls intact, ready to express his right to vote. However, animals can be given some rights within human law that would protect them from being so badly abused. We should bequeath to animals the freedom from human use and exploitation, and that, of course, means not murdering and eating them.

This generation is waking up to the reality that many individual ‘choices’ about matters such as meat consumption are having an impact on the future viability of the Earth and our future as a species. Many people are also beginning to care a whole lot more about animal sentience, and want to extend the principal of non-exploitation to them.

It is not that difficult to do. We just need to break though the species barrier and see the individuality and person-hood in all beings. The ultimate feel-good factor in food consumption is knowing that your choice is based on non-harm, compassion and life.

Step away from Hades Underworld and enter the gates of Hell.     I hear the future calling.