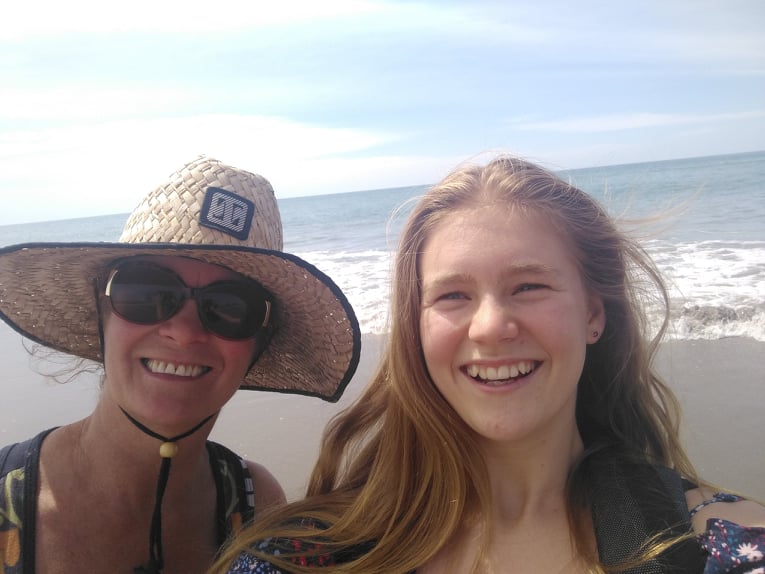 Next in our series of Mother and Daughter vegan activists, we meet Mel Wilson and Lily Carrington.

Mel, can you describe your own journey to veganism?

I grew up eating meat every night at dinner, and I didn’t think anything of it, it was just what my parents gave me to eat. My little sister, Tracy, realised much earlier than me that it wasn’t ok, I think she was around 10 years old when she first said she didn’t want to eat meat/animals. When I was pregnant with my first child at 22 years old I finally stopped eating animal flesh. I went vegetarian, and then about 3 years later fully plant based but still wasn’t vegan. I hadn’t fully connected what happens to animals in the egg and dairy industries as I went back to eating milk chocolate and cheese for a few years. I don’t have a clear memory of a moment when I realised that as a vegetarian I was contributing to so much death, it most likely was partly due to my awesome sister’s influence again.  I stopped buying cheese and milk chocolate for ethical reasons around 10 years ago, and my 3 children went vegan with me.  When they visited their father they were sometimes given dairy and eggs but very soon started refusing to eat it as they knew the reasons why we’d stopped at home and didn’t want to be contributing to the hurting and killing of animals.  All three of my children are still vegan and none of them have even considered deviating from that path.  It’s not a diet, it’s not wanting to hurt and kill animals or pay someone to do it for us.  They all enjoy food immensely and none of them have ever felt they were missing out. 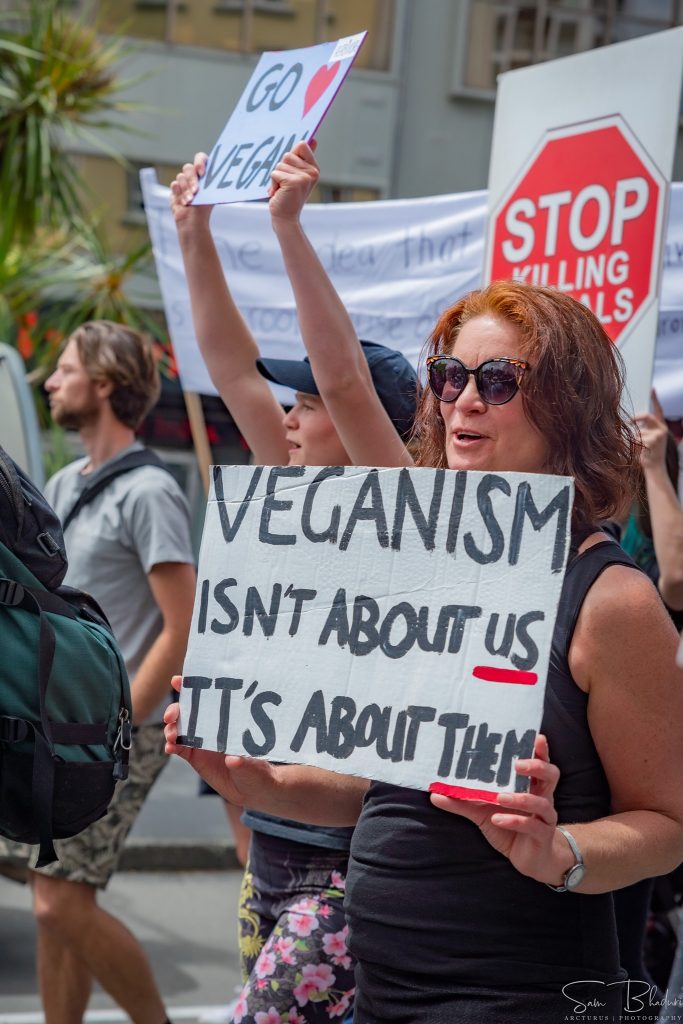 When did you begin your animal activism?

It took me a bit longer to get into activism.  I am fairly awkward in social situations, and quite an introvert.  I remember seeing that Anonymous for the Voiceless were looking for someone to take over organising cubes in Hamilton. I’d never been to a cube before and I was nervous, not sure I could do it, but I knew that someone needed to and no-one else was coming forward so I just decided to do it.  I contacted a few people looking for co-organisers, in particular someone a bit more outgoing than me.  Luckily my awesome sister agreed to help with organising, and also another friend, Chris, agreed to help too.  We’ve done AV cubes monthly for around 3 years.  There were some suggestions from other activists that I start up an Animal Save Chapter in Hamilton, so I said ok to that too and we did a few vigils. We moved on to doing SAVE Squares fairly soon, as talking one on one to people seems to have a big impact on getting people to change their behaviour, especially while watching footage of the agriculture industry. Lily, my youngest child, decided that once a month wasn’t enough, and starting at the beginning of this year we’ve been doing weekly street outreach events.  We either do a SAVE Square or an AV cube in Hamilton, or sometimes go to Mt Maunganui to join with activists there.  We organised a live export event last weekend, and we’ve been to 2 animal rights marches.  Lily does online activism daily and has her own tiktok, facebook, youtube and Instagram accounts purely for activism.  Supermarket visits are spent partly shopping but also stickering and we have a large supply of stickers.  We don’t visit a supermarket without putting stickers on a few things to hopefully make people think about their purchases. The more we do, the more we know we need to do, and it’s frustrating knowing so many people either don’t know or don’t care, but we’ll never stop trying.  We’re lucky to know lots of hardworking activists who are an inspiration to us both. 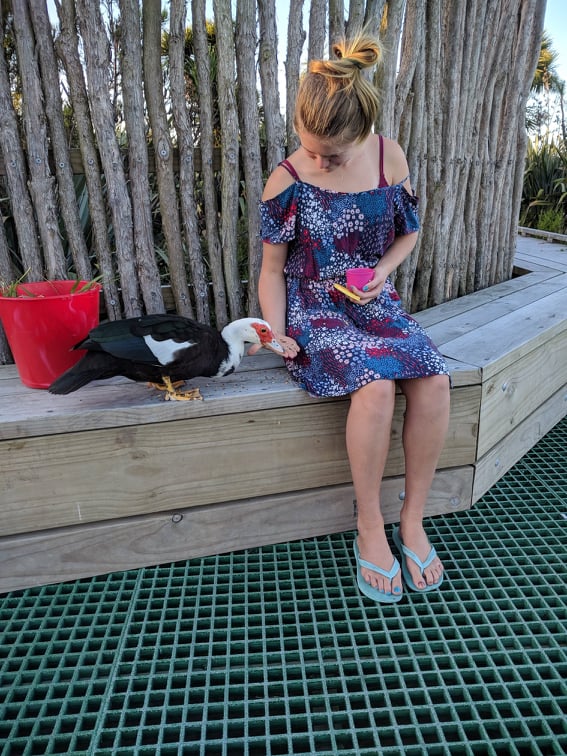 Is Lily primarily vegan for the animals?

Animals are the victims and they are lily’s main priority. She also cares about the environment and state of the planet, but only because what happens to the planet affects all the earthlings on it. Her activism covers topics like health but mainly just to debunk the argument that we need to eat animal products for our health, and then she puts the focus back to the animals.

How is Lily influencing her friends, teachers and so on, with her activism for animals?

I know Lily has influenced a few friends to go vegan, at least two are fully vegan and she has definitely influenced others. I hope some of her teachers and other students have been influenced by her speeches, presentations, formal and creative writing and other schoolwork she has used as a voice for the animals. Recently her English teacher was so moved by a narrative she wrote about a lamb in a slaughterhouse that he decided to have vegetable curry that night instead of the lamb curry he had planned. 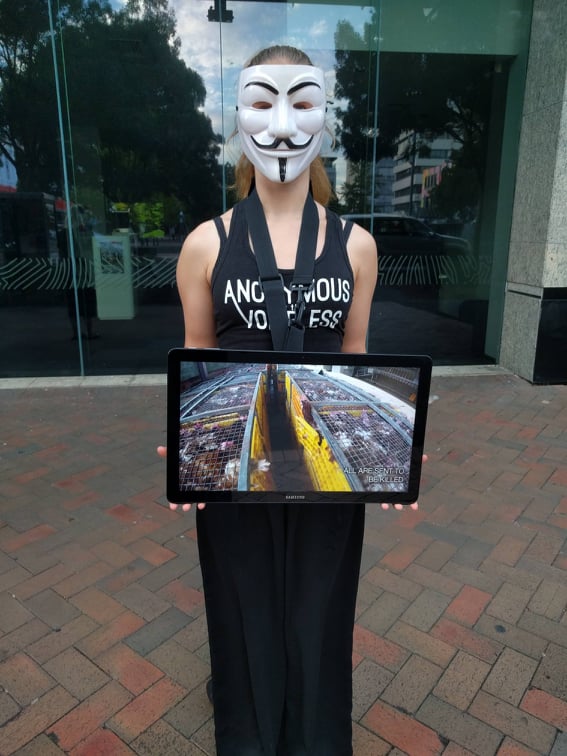 Lily is certainly very active on social media, and has also written stories and given speeches, very impressive for a 16 year old.   Tell us some of the things Lily has done.

Lily has done 2 speeches for school which were well written and persuasive.  She would never choose to enter a speech competition for fun, or to compete, but she did it to try to influence others towards veganism. She has written creative pieces, formal pieces, and carried out school projects in both primary and secondary school which highlight the cruelty in the meat, dairy and egg industries. She posts on social media daily, she is now creating her own videos to share on social media. She replies to comments on her posts which would drive me crazy but she hopes to influence people who show an interest.  Activism is an essential daily activity for Lily. This is on top of caring for our 10 small animal companions, schoolwork and gardening.

What makes you most proud of her?

Her dedication and her bravery.  As a natural introvert, it doesn’t come naturally to make a speech or to speak to strangers at cubes.  But the most important thing to Lily is trying to help animals, so she puts herself out of her comfort zone over and over again with this in mind. She spent lockdowns watching Earthling Ed over and over, and making cue cards of common arguments against veganism and good responses to those.  Then when we started doing cubes again she started doing outreach (she’d mostly stood in the cube up til that point).  Now she is one of our best outreachers (I may be a little biased but she is really good!)  She isn’t scared to confront people with their hypocrisy, and firmly holds them accountable, without allowing them to derail the conversation. 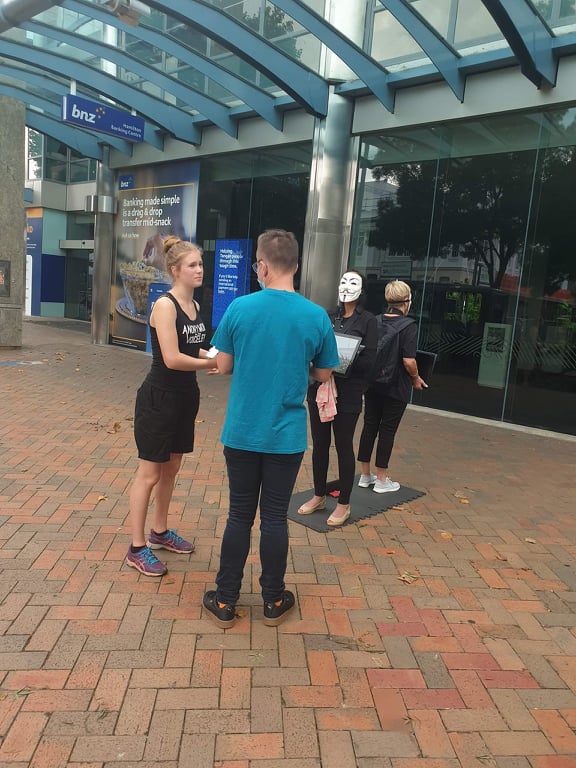 What do you hope for Lily in the next five years?

I hope that Lily gets to see some progress with more and more people going vegan.  I hope that she feels the change she is contributing to and knows she’s making a difference. I hope she continues to accept challenges, knowing how capable she is.

Thankyou for your time, Mel.