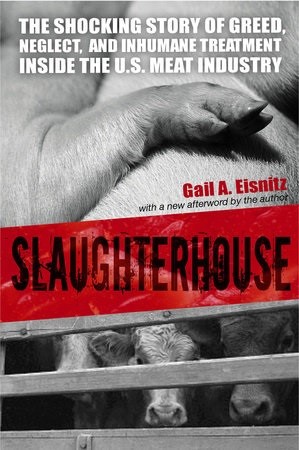 Remarkable undercover journalist and Author GAIL A EISNITZ answers End Animal Slaughter’s questions about her groundbreaking book SLAUGHTERHOUSE.  In her book Gail documented almost unbelievable transgressions against humane slaughter, causing cattle, pigs, horses and chickens to undergo agonising suffering at the end of their lives in American slaughterhouses.    Gail focuses on the industry and workers’ stories, and the result is a book that is heartbreaking, powerful and unforgettable.

Q:  Gail, did you always know you wanted to work with animals?  Where did your journey as an animal advocate have its roots?

I knew that I wanted to work with animals when I saw a nature program on public television when I was in my early teens and it depicted two polar bear cubs on an ice floe looking up at the camera operator in a helicopter.  Their mother had just been shot and killed.  That image was so pathetically sad, it became seared in my brain.  A few years after that, I wrote a high school research paper on endangered species.  When I found out that the Passenger Pigeon, for example, which was once so plentiful in the US that flocks used to blacken the skies for miles, was extinct, I was appalled.  And I was hooked on saving animals, in one form or another.

Q:  Are you still working full-time at the HFA?  What does your job entail now?

Yes, I am still happily employed by Humane Farming Association where I have been chief investigator for 27 years.  I’m fortunate to not be running around the country like a crazy person investigating slaughterhouses anymore.  After my book was published, I focused largely on exposing conditions inside factory hog farms and dairies, where conditions are unequivocally far worse than those in slaughterhouses.  We held press conferences, ran newspaper ads, filed legal petitions for prosecutions with the states’ highest law enforcement officials, anything we could do to expose conditions inside factory farms.

Most recently, I have been working to reform the US Department of Agriculture’s (USDA) Livestock Indemnity Program, which is a ridiculous government program that reimburses farmers and ranchers for animals who died in inclement weather, whether or not the producers took any action to protect the animals from dangerous weather conditions.  In other words, US taxpayers are footing the bill for millions of animals that freeze to death, suffocate in snow, drown in floods, or die from heat stroke because these animals are not provided adequate protections from harsh weather.  And I work on a regular basis on cruelty cases that come across my desk.  For example, right now, I have engaged the USDA and its investigative arm to conduct a criminal investigation into a large illegal slaughter operation in the western United States.

Q: You showed great tenacity in your investigation to bring the slaughterhouse atrocities to light, and to attempt to rectify great wrongs that were taking place not only against poor animals, but also against workers.   You seem to have compassion and a strong sense of  justice – Is this what drives you?

Q: In your investigations you also found that political candidates were jumping into bed with mega factory farm owners, and the United States Department of Agriculture was accommodating the meat industry at the public’s expense.  Tell us about that.

The USDA is charged with two radically opposing missions.  The very same officials who are supposed to promote the sale of agricultural products are also charged with protecting consumers from contaminated meat and enforcing the Humane Slaughter Act.  The result of this duplicitous mission and the Department’s primary focus on marketing is that USDA’s ranks are filled with meat industry leaders who have demonstrated their abilities at increasing industry profits.  In SLAUGHTERHOUSE, I documented the fact that high-ranking officials with the National Cattlemen’s Association, the American Meat Institute, Livestock Industry Institute, factory farmers, and meat industry lobbyists, had all been appointed to senior positions of authority at USDA.  Including Secretary of Agriculture and Assistant Secretary of Agriculture overseeing marketing and humane slaughter.  With this crude revolving door, the USDA has literally allowed the regulated industry to police itself from inside the government.

In SLAUGHTERHOUSE, I documented the fact that high-ranking officials with the National Cattlemen’s Association, the American Meat Institute, Livestock Industry Institute, factory farmers, and meat industry lobbyists, had all been appointed to senior positions of authority at USDA.  The USDA has literally allowed the regulated industry to police itself.

Q:  How did things get so bad within slaughterhouses that cows were being skinned alive, pigs thrown into scalding water fully conscious, animals were routinely dragged and beaten and thrown half-dead on piles to die?

In the last few decades, thousands of small to midsized slaughterhouses in the US have been forced out of business by a handful of large, high-speed operations, each with the capacity to kill more than a million animals a year.  With fewer slaughterhouses killing an ever growing number of animals, slaughter line speeds have skyrocketed.

It goes without saying that everything boils down to money.  Today, the faster the slaughter line speed, the more money the slaughterhouse can make.  The problem also exists in the reverse:  when line speeds are so fast, a minute of downtime can spell a loss of hundreds, if not thousands, of dollars.  As workers struggle to keep up with outlandish line speeds, a production mentality has emerged in which the slaughter line does not stop for anything:  not for contaminated meat, not for ill or injured workers, and least of all not for slow or frightened animals.  With individuals required to kill as many as 1,100 pigs an hour, workers resort to brutal handling techniques to keep the line running and keep their jobs.

Sadly, the US Department of Agriculture is now implementing a “modernization” plan for the slaughter of pigs – just as it has already done for the nine BILLION chickens we slaughter annually in the US – turning over key inspection responsibilities to the pork industry.  While current regulations allow slaughterhouses to kill 1,100 pigs per hour – or one pig every three seconds – apparently that’s not fast enough for the pork industry.  The Trump Administration’s new regulations, to be rolled out this summer, will actually remove that cap.  That means meat packers killing 90 percent of the nation’s pigs will be given the go-ahead to operate at unrestricted line speeds, killing pigs as fast, and as recklessly, as they want.

The Trump Administration’s new regulations, to be rolled out this summer, will mean meat packers killing 90 percent of the nation’s pigs will be given the go-ahead to operate at unrestricted line speeds, killing pigs as fast, and as recklessly, as they want.

Q: You tried to get the media interested in doing a story about your findings, but it was an uphill battle, why was that?

The major networks here in the US were gung ho to produce the story.  But when push came to shove, after they had each invested many months into producing the story, they refused to air it.  In the end, they all claimed that the reason they refused to air it was because the topic was “too disgusting” and that their viewers would change the channel.  Could it be that their sponsors and advertisers included agribusiness and the meat industry?

It was like pulling teeth to get a reporter at The Washington Post to finally do the story, but when he did a front page story on my findings, the article made a seismic shift in funding for humane slaughter enforcement.

Q: What were your impressions of the people who work in slaughterhouses?

They worked extremely hard under grueling conditions, especially individuals from foreign countries who are more willing to put up with the unbearable conditions and pace.  Many workers told me they wear diapers, because they are not allowed to take bathroom breaks.  Jobs in chicken slaughterhouses are the most dangerous jobs in the country.  In poultry plants, employees work at such incredibly high line speeds that it would be hard for them to not get repetitive motion illnesses.  After their fingers, hands, and wrists no longer work, these employees are just tossed aside – put on light duty and then unceremoniously fired.  As far as workers in red meat slaughterhouses, it’s not surprising that many of the employees I met suffered from alcoholism and engaged in domestic violence – where they took out their frustrations on their wives and children.

Q  A few years down the track since you wrote your book, what has changed in slaughterhouses?  Have there been improvements or as things as bad as ever?

It’s hard to say.  The Washington Post story that I mentioned earlier resulted in millions of dollars of Congressional appropriations to enforce what until that time had been the zero-budgeted Humane Slaughter Act.  In other words, despite the fact that the law had been on the books for 48 years, no one had ever bothered to fund its enforcement.  So, as a result of those appropriations, there have been new positions established to enforce the law.  However, there still are no USDA inspectors stationed on a fulltime basis in the areas of the plants where the animals are slaughtered.  I did a public documents request a few years ago which revealed that animals were still being repeatedly stunned with ineffective stunning equipment, shackled and hoisted, and bled all while fully conscious.  And those were the animals that the USDA inspectors just happened to see.  And it’s hard for inspectors to know what is actually going on, because everything changes and slows down when an inspector enters the slaughter area.

Q: You were diagnosed with cancer during your investigations, and you yourself attribute the protracted extreme stress you underwent as its cause.    Thank goodness you are fine now, but writing this book really was a trial by fire for you, wasn’t it?

I faced many deterrents in trying to document and expose slaughterhouse violations.  One supervisor at a national humane organization where I worked before coming to Humane Farming Association did everything conceivable to impede my efforts.  I had to quit my job.  He wound up in jail for embezzling, and is now facing life imprisonment for sex trafficking of a minor.  I struggled with difficult undercover cameras to get video evidence of violations, which I eventually got. The television networks refused to air my documentation.  One of my informants was stabbed to death and left to die in a garbage can.  I battled breast cancer while doing the investigation.  And then there were the other effects of stress that manifest both during the investigation and after my book was published.  Those were just a few of the obstacles I came up against while trying to expose the violations.  I guess it was a trial by fire in some ways.  As I said earlier, you just do what you have to do.  You do what is right in front of you. 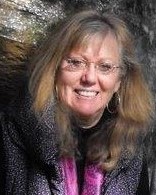 Thank you for answering our questions Gail.