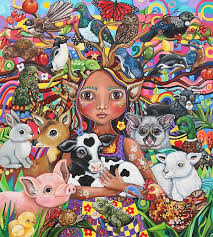 Our ability to eat many kinds of foods has led to our success as a species.   But continuing to eat other animals is ethically unacceptable because of the immeasurable suffering it causes, writes End Animal Slaughter Contributor PAUL STEVENSON.

Like our closest primate relations, the bonobo, chimpanzee, gorilla, and orangutan, Homo sapiens is an omnivore – “all-devouring” – an animal that can eat, and survive on, both plant and animal matter. As well as being able to consume both plant and animal matter, man can eat a vast range of plant foods; and, by means of culture, has created from plants a countless number of foods that do not exist in nature.

Omnivorous animals possess a great advantage as they are able to survive in a wide range of environments and through periods of food scarcity. This ability has allowed man to colonise the world from the equator to the arctic.

Evolution is the one constant in nature and there is no such thing as a “finished” species. Omnivores have evolved from widely different backgrounds, e.g. dogs have evolved from primarily carnivorous animals, while pigs are descended from primarily herbivorous ancestors. Man belongs to the Hominidae family, which includes all the primates. Most primate species are omnivorous, although they prefer to eat fruit.

Humans have progressively liberated themselves from the constraints of nature by means of culture. In doing so we have taken charge of our own evolution. This applies to everything we do, including diet, transport, medicine, power, and the homes we live in, just to name the primary aspects of our lives.   All our frugivore primate relations have extended their diets by becoming omnivorous, enabling them to survive – both in place and time – when their preferred foods were scarce. However, man alone has taken this process vastly further than any of the others by means of his culture.

The Neolithic Revolution describes the transformation in human diet by means of the cultivation of cereals, and the development of the first settled societies. Human beings are by nature poorly equipped for eating grains as they are both hard and small; we are basically descended from frugivores not granivores. Our culture alone has enabled us to cultivate, harvest and process grains, transforming them into edible foods; and our ability to store them for lengthy periods permitted the development of permanent settlements.

However, a serious unintended consequence of this over-dependence on grain was a deterioration in nutrition in comparison to our hunter-gatherer ancestors, who ate a far wider variety of foods. This process has been reversed in recent centuries, firstly with the spread of many varieties of plants from all over the world, and secondly with the development of biotechnology.

Most of the foods man now eats, plant and animal alike, have been greatly modified by breeding over the course of thousands of years. Biotechnology is taking this process to an entirely new level as it will permit us to create all manner of new foods by assembling them from their basic carbohydrate, fat and protein components. This illustrates the ongoing process of liberation from nature’s constraints, which has been the story of human history”.

Alongside the process of technological development is that of ethics. Ethics is the science of morals and our relationships with others, including both human beings and other creatures. Briefly put, technology concerns what we can do, whereas ethics is concerned with what we should do. Ethics has a vital role to play in the field of agriculture and nutrition as it concerns our treatment of other creatures.

Man has exploited other species for countless millennia, firstly as a hunter-gatherer, then as a herder, and latterly in animal agriculture – including fishing. Throughout this time catering for human nutrition was the primary concern, and the animals involved were seen solely as a means to that end. However, we now know that most of the species we exploit, both on land and at sea, experience life much as we do ourselves, especially in their ability to suffer. We cannot ignore this fact. The evolving field of ethics concerns our treatment of them.

Briefly stated, we have no need of animal foods. We can nourish ourselves adequately on plant foods alone without the need to use any animals at all. The entire animal industry is now ethically unacceptable because of the totally needless suffering it causes.

Health is comprised of two components: physical health, consisting of tangible bodily things; and mental, or emotional health, which consists of the meanings our minds make, its intangible mental creations.

Good health requires both good physical and good mental health. Our minds control our decisions. Human beings have an innate moral bias – we have moral minds. When we treat others well, not just humans but members of other species also, we feel good about ourselves. But when we treat others badly we feel bad inside ourselves. Good or bad feelings inevitably exert their effects on us either consciously or subconsciously. Thus we cannot describe ourselves as being in a good state of health when we feel bad about ourselves for harming others, because we are then in an adverse mental state of health.

We are able to eat other animals because we are omnivores by nature. But just because we are able to does not mean that we should. We know that we can enjoy good physical health without consuming any animal products. In view of the immense range of choices available there can be no possible justification for doing so. Our minds determine our decisions and we can choose to consume foods that contain no animal products.

Eating other animals is ethically unacceptable because of the incalculable, and appalling suffering it causes. We cannot possibly subject other creatures to such agonies and retain a good opinion of ourselves, and therefore cannot describe ourselves in a good state of mental health. Only by treating others with respect and eliminating all brutality can we ever enjoy an overall state of good health, both good physical and good emotional health. Only then can we experience life to the highest degree possible.

When we abandon our brutal exploitation of other creatures we become Enlightened Omnivores. Then we elevate ourselves to a higher plane of existence, to noble beings indeed. 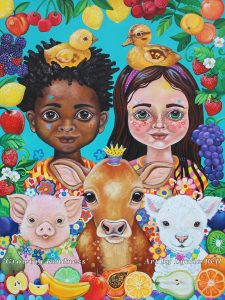