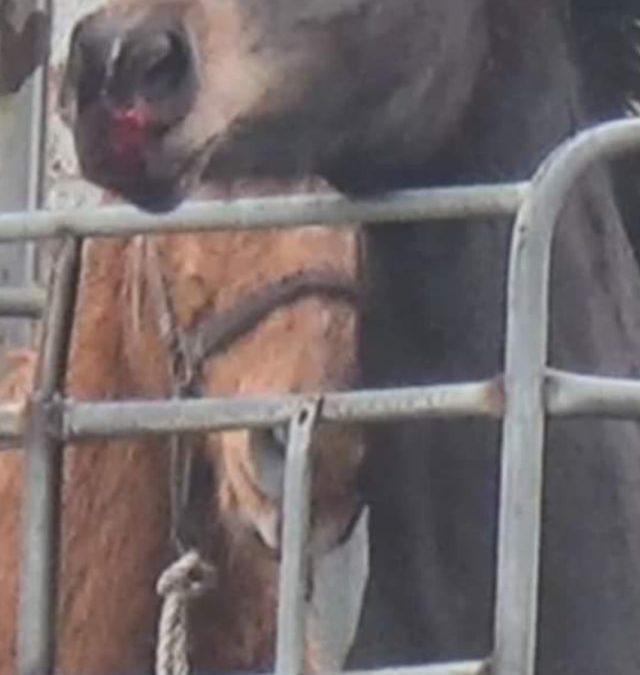 It is a heartbreaking picture, snapped with a cellphone.  A young horse, not yet two years old,  has just arrived at a slaughterhouse in South Korea.  The position of his ears show a heightened state of alertness, and blood trickles from his left nostril.  He looks as if he’s trying to locate the source of the frightening sounds or smells that bombard him, and within his body his large heart beats rapidly.

Soon he will be standing in a stun box designed for cattle, and will be knocked out with the same hammer his executioners use for cows:  ‘Things may get a little messy if they do not pass out at the first blow’ said a Korean official.

Before he is himself killed, he may witness the death of a companion.   He is the unnamed foal of US racehorse ‘Wonder Dreamer’, and he is going to slaughter because he was considered too slow to race.

All over the world equine athletes and their offspring are disposed of for human consumption or pet food.  In 2019 an ABC expose revealed the shocking truth of what happens to ex racehorses in Australia (graphic), and a PETA investigation uncovered the fate of American horses similar to the one year old horse in South Korea.

The only way this terrible suffering inflicted on beautiful animals can be stopped is for racing authorities all over the world to implement comprehensive retirement plans for unwanted horses. Better still, this cruel and exploitative industry should be banned altogether.

Warning:  Our feature article contains images and information that are upsetting.