TONGUE-TIED, BEATEN, CURSED AND MURDERED – The Trajedy of the Horseracing Industry 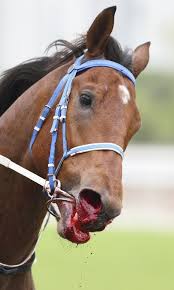 Responding to the recent Australian Broadcasting Corporation’s expose  End Animal Slaughter contributor LYNLEY TULLOCH says we shouldn’t be tongue-tied in speaking out against the abuse of racehorses.

The recent Melbourne Cup event, where yet another horse was injured, has highlighted animal welfare concerns. The race, held in November every year, corresponds with a national holiday in Australia. It is a 158-year-old institution, and the cause of rowdy celebration. Yet this year while about 81,000 spectators partied in hats and high-heels, knocking back alcohol, the horses weren’t having so much fun. 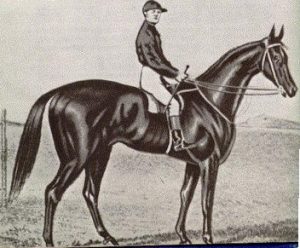 Racehorses are valued primarily for the money they can bring in on race day. And the money is big. The total prize pool for the Melbourne Cup 2019 was A$8,000,000. Horse racing is a 9 billion dollar industry in Australia, and given high status. It is said to be the ‘Sport of Kings’.

One horse named Rostropovich sustained a stress fracture to his pelvis at the 2019 Melbourne Cup and is now lame. He is said to be stable, but I would imagine his future in racing is uncertain. In fact, his entire future on the planet is uncertain. Many ex-racehorses are killed in slaughterhouses in Australia. Behind the partying of major race days is a legacy of animal cruelty. 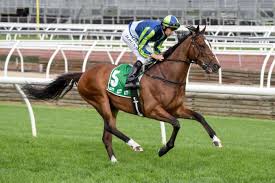 Five-year-old gelding Rostropovich, who fractured his pelvis at the 2019 Melbourne Cup.   He is responding to treatment, and now bearing weight on all four of his legs.

During this year’s Melbourne Cup  runner up jockey New Zealander Michael Walker, was fined $10,000 and banned from seven races for excessive whipping of his horse. His response? “I could bend over right now and let you hit me as hard as you want with those sticks and they don’t hurt.” Right. Well according to RSPCA, they do hurt: “There is no evidence to suggest that whipping does not hurt. Whips can cause bruising and inflammation”. 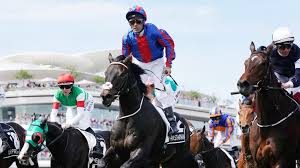 New Zealand jockey Michael Walker, who was fined $10,000 and banned from seven races for over-whipping his horse Prince of Arran in the 2019 Melbourne Cup.

From the cradle to the grave, horse racing is animal abuse. What many people may not know is that there is a high breeding rate and turnover of race horses in Australia. According to the Racing Australia Annual Report, over 14.000 foals are born in the racing industry each year. Another 8 and a half thousand are ‘retired’ from the track. More horses are being bred than are needed so that they have a larger pool of animals to draw from in the hopes of getting a winner. Bidda Jones, RSPCA’s Chief Scientist, calls this ‘searching for a diamond in the straw’.  In fact, only 300 of every 1000 foals born in the racing industry in Australia will ever end up racing.

This means that there is a lot of what is referred to as ‘horse wastage’. It was revealed in October this year through Australia’s ABC’s 7.30 program that thousands of registered racehorses are killed in slaughterhouses (for consumption)  or knackeries (for pet food) each year. This is after they may have earned hundreds of thousands in prize money. A 2008 report commissioned by the RSPCA to examine ”wastage” of Australian thoroughbred horses found 60 per cent of the animals processed at one abattoir originated from the racing industry. The report also indicated that 80 per cent of these horses had suffered neglect before being slaughtered. 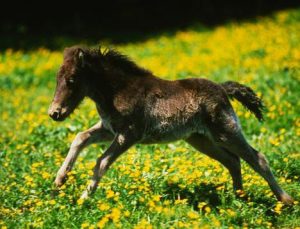 The racehorse industry over-breeds to increase the likelihood of producing winners.   Foals who aren’t viable or otherwise don’t make the cut, can be sent at days old to the slaughterhouse.

Professor Paul McGreevy , a veterinarian who spoke on the ABC 7.30 program, said that what happens to many of these ‘wastage’ horses is a grey area and that they often meet a grisly death. These horses are sold at sales yards, and brought by the slaughter industry for as little as $70. They are often discarded yearlings who did not make the mark, or older horses with injuries.  Their meat is then shipped to overseas markets in Europe, Russia and Japan. It is marketed for human consumption. 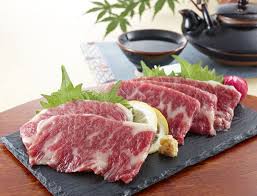 During the ABC investigation footage was shown of Meramist Abattoir. The treatment of these beautiful animals is disturbing to watch, as they are kicked and whipped, sworn at and taunted. One horse was dragged out of the transport truck by a rope tied to a tractor. He then collapsed. 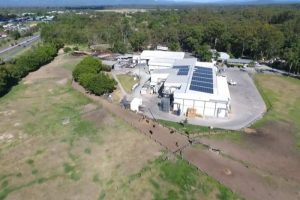 The disdain that the slaughterhouse workers hold for the horses is deeply distressing. These sensitive animals, full of intelligence and poise, are treated as – in the words of one worker  – ‘f****n maggots’. The workers repeatedly tell the animals they are going to die, indicating pleasure that they have ultimate control over their fate. They are subject to electrocution (anus and genitals included). These traumatized horses must face the end of their lives tortured by sadistic humans.

The extensive ABC investigation claimed that during a 22-day period a total of three hundred thoroughbred racing horses were killed at this slaughter house. These horses were forensically traced to their studs and collectively represent $4.670,770 in prize money. In one year alone over 4000 race horses are killed at Meramist.

The footage from inside the slaughter house was even more deeply disturbing.  One horse was recorded being bolted five times before he lost consciousness. One worker was filmed whooping in enjoyment, stomping and kicking a dying horse in the head. These horses are dying in pain and terror, watching other horses die, while cheerful music echoes from the radio. Just another day at work. It’s haunting.

Footage taken at knackeries also reveal horrific deaths of ex racehorses. They are loaded into a killing pen and shot in the head in front of each other. The videos of horses shaking in fear was particularly hard to watch. They stood there, unable to move, knowing what was going to happen to them, the fear chorusing through their veins.

These harrowing scenes stand in stark and brutal contrast with the party goers’ antics at this year’s Melbourne Cup. Excessive drinking and drunken escapades highlight the utter shallowness of a culture that has its blinkers on (excuse the pun). 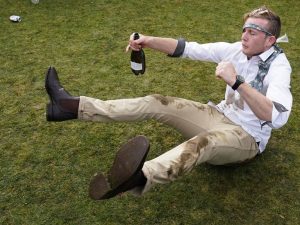 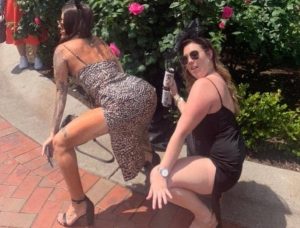 Drunken antics at the 2019 Melbourne Cup

Australia also ships race horses to Korea, and many are killed there. Footage recently emerged of this slaughter at one of the main horse abattoirs at Nonghyup on Jeju Island in South Korea. In this footage horses were beaten over the head with plastic pipes and chased into the slaughter house.

A third of the racehorses exported from Australia to Korea in the six years between 2013-2019 have since died. Most of them were slaughtered. In Korea, horses are killed for their meat and eaten. Too bad if you have a fancy name like ‘Road to Warrior’ – if you don’t meet the mark , you’re dead meat. Road to Warrior was a four year old gelding from Australia who had been in South Korea for fifteen months. He had only won one race and was sent to slaughter at Nonghyup at just four years of age. Horses can live for up to thirty years. 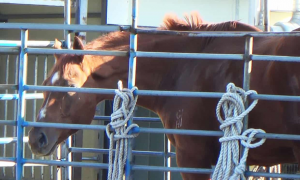 Australian horse next in line at a Korean slaughterhouse.

Winx’s brother was also killed in Nonghyup. Winx, the mighty mare with a 33-race winning streak dating over four years, was retired this year after winning the Queen Elizabeth Stakes. The Guardian recorded that  “It’s the third time Winx has won the Queen Elizabeth Stakes, netting a cool $2,320,000 in prize money, to end a remarkable career in which the mighty mare went 1,463 days without losing a race.  She was the nation’s darling. Yet her brother Bareul Jeong was not so lucky. His lineage mattered not. He was killed at Nonghyup after developing  a strained ligament.

Race horses also suffer during training and racing. Some horses will die as a result of injuries on the track. Statistics collated by the Coalition for the Protection of Racehorses demonstrate that one horse is killed on an Australian racetrack every three days. With over 30,000 horses in training in Australia, the scale of suffering from training is unimaginable. Earlier this year Melbourne Cup-winning horse trainer Darren Weir was charged with a total of nine offences including three counts of “engaging in the torturing, abusing, overworking and terrifying” of a racehorse and three counts of “causing unreasonable pain or suffering” to a racehorse. 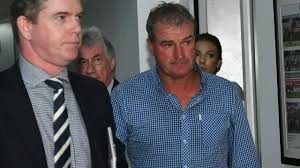 Disgraced horse trainer Darryn Weir, who was charged with animal abuse in February

During racing many horses suffer. They may experience bleeding in the windpipe and lungs (exercise induced pulmonary haemorrhage).  It is common enough to affect up to 50% of all racehorses and is a main cause of horse fatalities.

It is fairly common to see horses with nose bleeds after a race.  Pulmonary haemorrhage occurs after bursts of intense, strenuous exercise.

All horses are thrashed by a whip – despite the fact that it does not make them run faster according to a 2011 study by the University of Sydney. Tongue ties are used by many trainers, where the horse’s tongue is secured to the base of his jaw with a tie. This is said to prevent choking or the tongue getting in the way of the bit during training. The RSPCA says it can cause stress, bruising, pain, anxiety and lacerations. 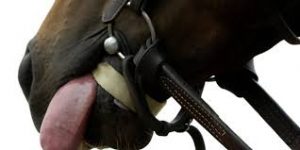 Many racehorses have their tongues tied to give the jockeys more control.

RSPCA’s Bidda Jones has also highlighted other issues with horse racing including single house stabling which disrupts normal feeding patterns and socialization. These horses are treated as nothing more than commodities – to be bought and sold; pushed beyond reasonable limits; injured; hurt and destroyed.

We don’t have our tongues tied and we need to speak out against this suffering. If we don’t speak up against horse racing we are effectively sanctioning this suffering by default. Don’t support the racing industry. Don’t go to races. Don’t bet on horses.

Dr Lynley Tulloch has a PhD in sustainability education and is an animal rights advocate.