Voices For Animals Across The Years: Donald Watson, Father of the Vegan Movement 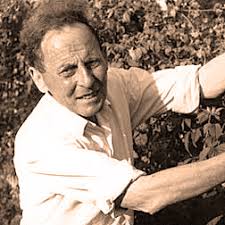 Vegetarianism has been around for a very long time. Some ancient Greek philosophers, such as Epicurus, advocated abstaining from animal flesh, and the religious sects of Buddhism and Hinduism have encouraged vegetarianism for hundreds of years. Although it is not clear who invented the word ‘vegetarian’ it came into common usage in the 1830s when it was mainly associated with religious conservatives.  Even today the Church of the Seventh-Day Adventists encourages a vegetarian diet.

We do know who popularised the term ‘vegan’ though.  It was Donald Watson, whose wife Dorothy came up with the name as depicting ‘the beginning and the end of ‘vegetarian’.

Born into a mining community in Mexborough, Yorkshire, UK, Watson  grew up in an environment where the concept of vegetarianism, let alone veganism, was something unheard of. As a child, he used to visit his Uncle George’s farm, where he saw a pig being slaughtered.  This incident traumatised him, leading him to take a New Year’s Resolution never to eat meat again when he was only 14.

He later wrote of his farm experience:

I was surrounded by interesting animals. They all “gave” something: the farm horse pulled the plough, the lighter horse pulled the trap, the cows “gave” milk, the hens “gave” eggs and the cockerel was a useful “alarm clock” – I didn’t realise at that time that he had another function, too. The sheep “gave” wool. I could never understand what the pigs “gave”, but they seemed such friendly creatures – always glad to see me.[4]

Watson was a committed pacifist throughout his long life and, together with his siblings, was a conscientious objector during the Second World War.  When she learned about this their conservative mother famously said that she ‘ felt like a hen that had hatched a clutch of duck eggs!’.

Watson spent most of his adult life in Cumbria; where he pursued his outdoor interests, such as walking and cycling, and also gardening (he was always very careful to try not to kill worms and other insects when he was digging).

He truly believed in the benefits of following a vegan lifestyle, free of all harmful toxins and animal products.  Because of the association of medication with vivisection and animal testing, he never took medication of any sort throughout his life.

He once said his biggest achievement would be to die peacefully in his sleep when his body would be worn out, and this is what happened in 2005 when he was 95.

Donald Watson would be mighty proud to see what the non-violent, harmless diet he advocated is beginning to transform the world. 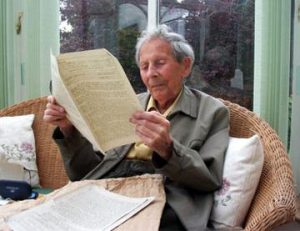 Donald Watson lived to the age of 95 abstaining from dairy products, eggs and honey.  He never took any kind of medication during  his long, healthy and productive life.