Wading Into Murky Waters: The Truth About Duckshooting 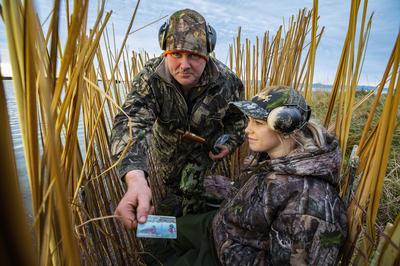 Duckshooting in New Zealand is a centuries-long activity.   It’s time to bring it to a stop, writes End Animal Slaughter’s Sandra Kyle.

In a few short days, the pitter-patter of tiny bullets will be heard near wetlands all over New Zealand. The air will be thick with the smell of gunshot, and dead and injured birds will rain on the ground.   In an estimated 25% of cases these birds will not be killed outright, but will suffer an agonising, lingering death. Is this the kind and compassionate New Zealand our Prime Minister Jacinda Ardern keeps talking about, or is it government-sanctioned carnage?

The opening of the gamebird season – generally the first weekend of May, but delayed this year because of Covid-19 restrictions – has been part of New Zealand’s history since the early nineteenth century.  Although it is declining in popularity, over 30,000 gamebird hunting licences are still sold in New Zealand annually.

Every year during the weeks-long season, shooters get up before dawn, don camouflage suits and war paint, trek down to lakes, ponds and rivers, and install themselves in hidden huts called maimai, or sit in dingys near reeds, away from the ducks’ keen eyesight.  The first rays of daylight reveal a bucolic scene. Sleeping birds rest their heads gently on their backs, next to their lifelong partners, also sleeping.

Suddenly shots fire out, and the quiet scene become turbulent with panicking family and friends, the air filled with their cries.

Terrified, they take to the sky in an effort to escape, only to be picked off by shooters who fist pump and whoop in delight when they strike their mark. This wetland was the birds’ refuge, and now, cruelly and senselessly, their life is over.

Birds who do not die outright (it takes a good marksman to kill them immediately) may perish in the mouths of retriever dogs, or have their necks wrung by shooters. Many will just lay where they fell, undiscovered, until the life ebbs from them.

There is so much wrong with duck shooting that it is hard to know where to begin, but we could start with sentience.

They know hunger and thirst, heat and cold. Like us, they can feel excitement, joy, and fear, and form attachments to their families and friends.

Their perception of pain is analogous to ours also.  Vets use a combination of opiods, corticosteroids, anti-inflammatories and local anaesthetics to manage the pain of birds.  I have looked after birds as a volunteer for bird rescue organisations, have applied pain relief, and seen the results for myself.   Universally, animals in the wild generally do not show their pain or weaknesses, because it makes them vulnerable.  It is hard by looking at a bird to know if they are in pain, but you can almost immediately see them relax and settle once pain relief is administered.

What about the ethics of shooting ducks?  It is called a ‘sport’, but a sport requires two equally matched parties playing by the same rules.  Duckshooting, and hunting in general,  is hardly  a ‘sport’  ‘Carnage’ is a better word.   And not only ducks are shot.   Protected species are also killed and injured because of incompetent shooters, or those who are deliberately flouting the rules.

It is certainly not heroic either.   For all its macho image, duckshooting  is a cowardly activity. The shooter lurks in a hiding place and employs deceptive techniques such as decoy ducks and hooters to lure his mismatched opponents.  This would be laughable if it were not so tragic.

There is not one compelling reason for shooting ducks.

It goes without saying that we don’t have to kill them for our food.  In fact many shooters don’t bother eating their prey.  While some may dine out on duck for weeks, others simply discard their bodies at the sides of roads and in rubbish dumps, or bury them.

The conservation reason is also a myth.   Contrary to the belief they would “blacken the sky” if left alone to breed,  Nature has her own way of culling. When numbers are low, and the environment can support them, species breed more, and vice versa.  While no one wishes starvation, disease or predation on waterfowl, shooting an animal because he or she might starve or get sick is arbitrary, and in the end, pretty much useless. Professor Richard Kingsford, who directs the Centre for Ecosystem Science at the University of New South Wales, has been conducting yearly surveys of waterbird populations across eastern Australia for three decades.  New South Wales is one of the Australian states where duckshooting is banned, and Professor Kingsford and his team have not detected an increase in numbers of birds as a result of the ban.   If anything there is a slight decline, but it is due to habitat loss and not hunting.  It is frankly unbelievable to me that shooters kill birds for conservation reasons.    They even cooperate with the government to establish wetlands, so, as the Fish and Game website states, that they can have more ‘fun’ next year.

For the princely sum of $23.00, a parent can buy a child’s season’s pass to kill ducks. A few years ago Fish and Game promoted the season by showing a young boy with a firearm over his shoulder and holding a string of dead ducks.   What traits are we fostering in our children and in our communities by perpetuating the annual duck shooting season? Indifference to suffering? Irreverence towards other forms of life? Cruelty?

Why don’t we recoil from seeing children take up arms and shoot harmless animals?

Why aren’t we modelling kindness and compassion to our children? Why don’t we teach through our own behaviour a respect for all life, and for other species’ natural right to share the planet?

Why as a society would we encourage any activity that serves to dull our compassion and pity?

Are we not aware that violence breeds violence? Is the parallel between killing animals and hurting human beings not clear?

Why can’t our Prime Minister see that?

Duck shooting is the unnecessary taking of life. The only conclusion we can draw for its popularity is that shooters enjoy killing.

We really are wading into murky waters now.

Sandra Kyle is a full-time animal activist.   She started End Animal Slaughter in 2018, with the goal of closing all slaughterhouses in the western world by 2025.