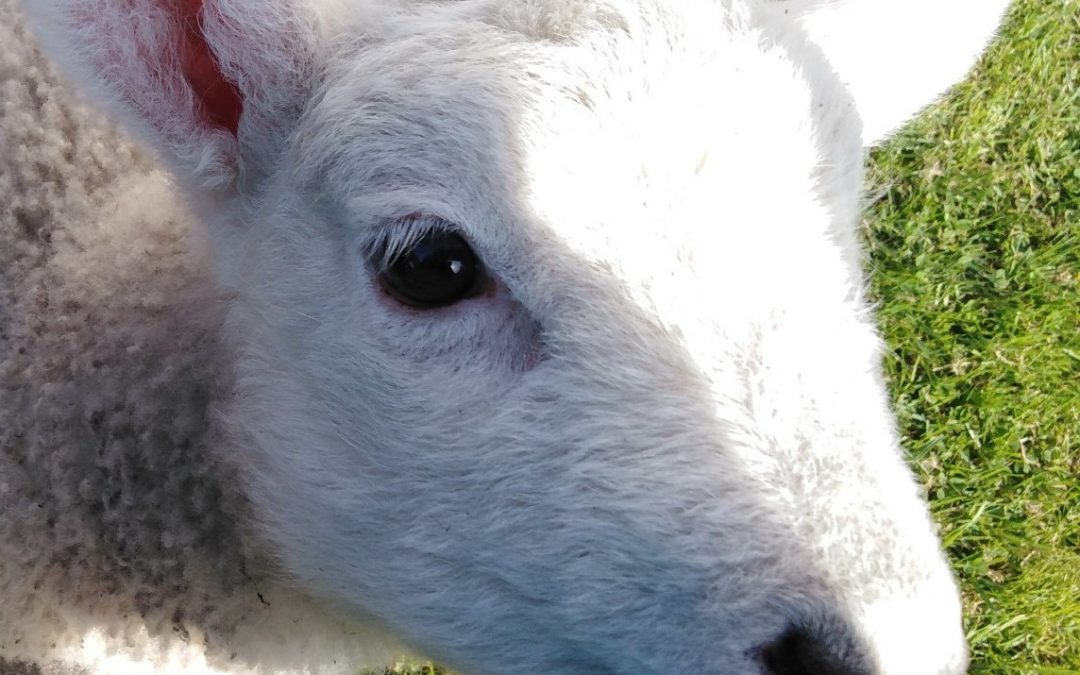 When End Animal Slaughter’s Sandra Kyle looked after a one month old lamb she found out some endearing things about sheep.

It is estimated we slaughter more than half a billion animals every single year for food, and also for religious sacrifice.

See Sandra’s blog below, and read PETA’s article about un-ewe-sual facts about this much-underestimated species. 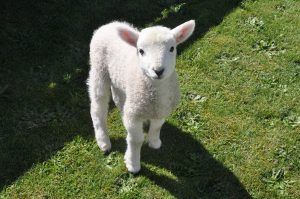 WHAT POM POM TAUGHT ME

When one of my music student’s family went away, they asked me if I would look after their pet Romney lamb. Pom Pom entered my home for the first time wearing two nappies, and proceeded to bound around excitedly. When you are just three weeks into this world, everything is new, everything is an adventure – there are so many sights, sounds and smells you are experiencing for the first time!   His human mother showed how to prepare his formula and bottle feed him, an experience I won’t quickly forget! It was like holding onto a suction pipe, and I wondered if my arm would disappear down his throat as he pulled on the teat in strong, intense gulps, his long tail wagging in enjoyment, just like a dog’s.

I kept Pom Pom outside in my back yard for most of the day, with frequent visits for a feed or cuddle, and at night he slept inside in a cage lined with hay. Once or twice I would get up to check on him and when he saw me he would shake off sleep and get to his feet, pressing his forehead against the cage for me to stroke his head and ears. I could tell he enjoyed, and got comfort from, this simple act of affection, and a bond soon got established between us.

If I were out in the unfenced area of my yard Pom Pom would be with me, supervised so he wasn’t tempted to jump over the low fence that borders the front of my property. He would go from area to area, bush to bush, curious and enthusiastic, sampling some of the food Nature provides his kind.  At first he didn’t seem to know how to eat properly and I frequently saw him with a blade of grass hanging out of his mouth while he made contorted mouth and head movements trying to get it inside! Pom Pom didn’t have a sheep Mum or flock to show him what to do, and some things he had to trial and error for himself.

When I needed to put him in the secure area at the back of my property, which he didn’t like so much because there was no company, he would jump up and bunt the fence as I closed the gate, to show me how angry he was. When Pom Pom wanted food or company, he would maaaa loudly, a sound that reminded me of a baby crying.

One of the cutest things about Pom Pom was when his spirits were high he would run around the house, from time to time springing in the air and kicking his back legs together sideways, like Gene Kelly in Singing in the Rain.   Sometimes at the end of such a display he would finish off by landing on all four feet at the same time – thump thump thump thump thump, and then come to a complete halt as if to say ‘Well, that was fun! What now?’

Looking after Pom Pom for ten days confirmed what I already knew. That sheep are sentient beings. They feel pain and sorrow. They have intelligence, desires, drives, perceptions, fears and joys. They respond to love. Nature has equipped them with inner knowledge, but they still have to learn how to do the most basic things, just like human children do.

When his family came to pick him up they all noticed how Pom Pom had grown. He was already big and strong, his coat had grown thick and he was much heavier. They noticed how he didn’t want to leave my side. I knew that he would miss me for all of five minutes, and then he would adjust again to his human family, and his life with them. Pom Pom has his own secure paddock next to their house, and plenty of interaction with his human family. Soon the family will be adopting two more sheep, so he will also have the company of his own kind.

I am beside myself with sorrow when I think of the half billion animals, many of them sheep, brutally sacrificed every year for Eid and other religious festivals.

This is no way for civilised human beings to be living their lives. Eating baby animals, eating any animals, requires an act of violence and injustice. It is barbaric to be slaughtering intelligent, sensitive, sentient – and possibly sapient – beings for our taste buds, when we don’t need to be doing it.

If you like to eat roast lamb, has reading this account made any difference to you at all?   Maybe not, but if not, why not?

Only you can answer that question.